On the heels of a record-shattering 2020, CD Projekt starts 2021 with its best Q1 period of all time.

Costs of goods and services sold was up 208% to 23.65 million PLN due to higher expenses of in-development projects including The Witcher 3 and Cyberpunk 2077's next-gen port, new CP2077 patches, and DLC and expansions for the new game.

Depreciation is also a big portion of the cost increase. CD Projekt is depreciating 60% of Cyberpunk 2077's total development costs 3% every quarter over a five-year period, and Q1 marks the first charge of this value.

"The reported increase compared to the reference period is mostly due to ongoing depreciation of Cyberpunk 2077," CD Projekt states.

The company says its depreciation and costs are in line with expectations.

"Selling costs comprised mainly upkeep and maintenance of previously published products, at 30 210 thousand PLN, where - in addition to a relatively fixed level of GWENT development and maintenance expenses - CD PROJEKT RED also recognizes maintenance of Cyberpunk 2077, including intensive work on the part of the development team on patches and updates, which had no counterpart in the previous year."

The Group is currently facing a class action securities fraud lawsuit in the United States which is expected to move forward in June. 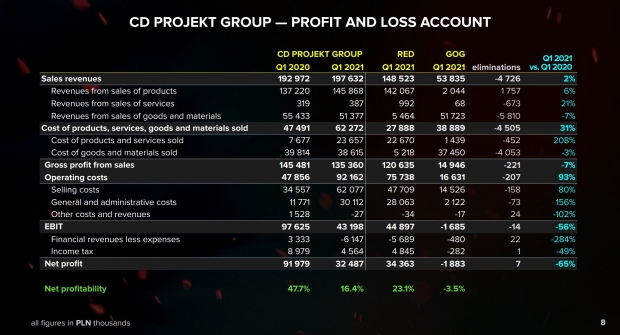 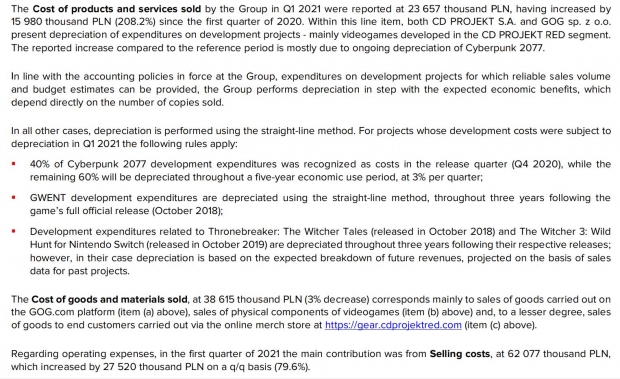