Nintendo's digital earnings surge thanks to COVID-19 quarantines and record-breaking game sales across its Switch platform. 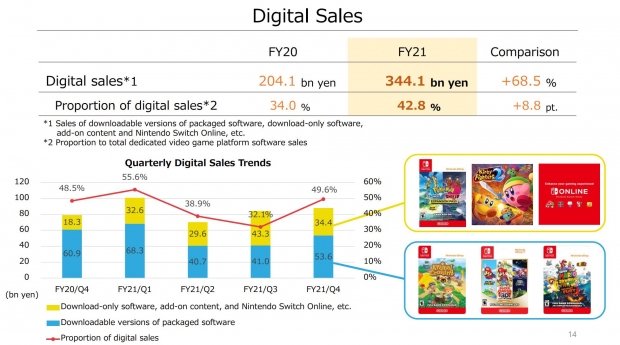 Digital gaming has surged as worldwide countries sheltered in place against the coronavirus pandemic. Nintendo in particular saw a boom in digital games earnings; Nintendo generated a whopping $3.2 billion from digital game sales, subscriptions, DLC, and microtransactions on the eShop in FY2021, up nearly 70% from last year.

Nintendo currently has 10 best-selling first-party Switch games that have all broken 10 million copies each--some, like Mario Kart 8 and Animal Crossing New Horizons, are at 30 million+.

Despite the strong spike in digital revenues, digital game sales only accounted for ~20% of Nintendo's total game segment earnings of $16 billion.

Hardware is likewise up to new record highs. The Switch has currently shipped 84.59 million units worldwide, and it moved over 28 million consoles in FY2021. Hardware generated a staggering $8.2 billion in revenues throughout the year as every Switch model sold for a profit.