All NewsBusiness, Financial & LegalCases, Cooling & PSUContests & GiveawaysCPU, APU & ChipsetsDealsDisplays & ProjectorsGamingMotherboardsScience, Space & RoboticsStorageVideo CardsVirtual & Augmented Reality
All ReviewsAll ArticlesAudio, Sound & SpeakersCases, Cooling & PSUCPUs, Chipsets & SoCsComputer SystemsDisplays & ProjectorsGamingMotherboardsNetworkingPeripheralsStorageVideo Cards
GuidesGamingAsk the ExpertsNewsletterAboutForums
Chia Coin MiningRTX 3090RTX 3080RTX 3070HDMI 2.1Bitcoin MiningBattlefield 6
Cameras
Samsung has released its latest i-series digital camera, the i85, which features an 8 Megapixel sensor and 5x non-protruding optical zoom. It also features a high resolution 3-inch LCD display and it's only 2cm thick. But these are just a range of features that you'd find on just about any decent camera these days, so Samsung has turned the i85 into something a bit out of the ordinary.

The i85 will allow you to watch MPEG, AVI, MOV, WMV and ASF movie files on it an thanks to a built in 2.5mm headphone jack, you can use it as a PMP. It will also play MP3 and WAV audio files. It also has two stereo speakers with SRS 3D audio. 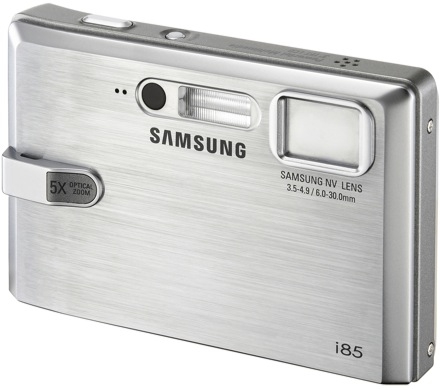 You can also use it to shoot video at 800x592 pixels in MPEG-4 and you can edit the video on the camera. The zoom also functions while you're shooting video, which is great for tracking moving objects.

Samsung has also added digital image stabilization (it increases the ISO setting, but this also means more image noise), 14 scene modes and face detection. The i85 has 256MB of built in memory, which is just massive compared to what you normally get and it will take SDHC cards up to at least 4GB in size.

The i85 should arrive later this autumn and should retail for around US$349.
Newsletter Subscription