Sometimes it's nice to take a slow morning walk, and during that morning walk, you usually aren't expecting to find something that is truly confusing.

Well, a resident of Hoboken, New Jersey, was out for a morning stroll in a park near the Hudson River when she spotted hundreds of worms forming a spiral on the sidewalk. Tiffanie Fisher, a local councilperson, shared the images on her Twitter, calling the strange assortment of worms a "wormnado". Locals quickly began commenting on the images, one saying it "looks like a portal out of a horror movie".

Kevin Butt, a soil ecology expert at the University of Central Lancashire, said, "In short, worms have likely come to the soil surface due to excess rainwater, have been unable to burrow down due to movement on to a hard surface and the shape seen may well be a function of the water draining away, rather than specific behaviour of the earthworms."

However, Kyungsoo Yoo, a professor at the University of Minnesota's Department of Soil, Water, and Climate, suggests that vibrations from moles potentially burrowing underneath the worms could have led to the worms coming up from under the ground. Yoo also agreed that the worms could have surfaced like this due to rainfall. "I have never seen this behavior," Yoo wrote in an email. "This tornado shape is really interesting."

Rhonda Sherman, the Compost Learning Lab director at North Carolina State University, said, "Earthworms cluster together when there is an environmental threat. Looking at the photo of the spiral of worms does not provide enough information about the environmental conditions that could be causing the worms to cluster together."

The strangest part of this story is that only a few hours after the worms were spotted, they disappeared, according to the Hoboken resident. 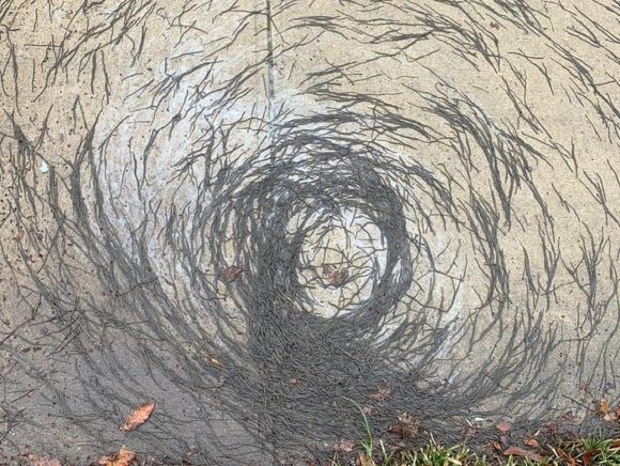