ADATA has just revealed its new XPG GAMMIX S70 BLADE PCIe Gen4 x4 M.2 2280 SSD, packing the PCIe 4.0 interface and some ridiculous speeds for even the craziest of demands.

ADATA is making its new high-end XPG GAMMIX S70 BLADE PCIe Gen4 x4 M.2 2280 SSD available in capacities of up to 2TB, with a large 5-year warranty on top. ADATA is using a slim temperature-resistant aluminum heat sink on the GAMMIX S70 BLADE SSD which "gets rid of heat effectively. So effective it can reduce temperatures by up to twenty percent. Plus, the heat sink looks cool too with its geometric ridges". 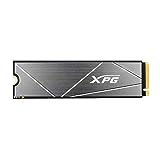