Cyberpunk 2077's controversial release has taught CD Projekt RED what not to do. Now it's changing how it communicates and showcases new games. 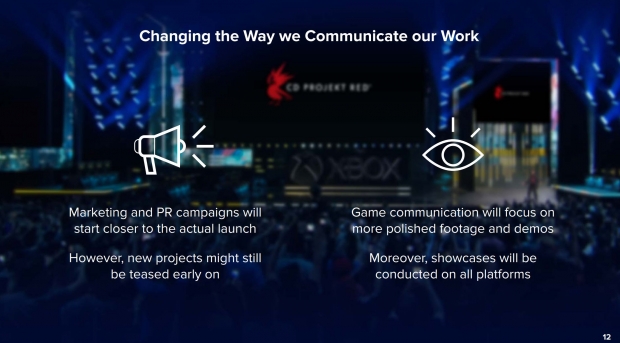 CD Projekt RED promises to avoid potentially misrepresenting its games with early demos and builds. The company today announced its marketing campaigns will be much shorter. CDPR will only show gameplay and deep dive videos of its upcoming projects close to their release. The goal is to promote a game that will actually release--not a concept build that's dramatically different than the final product.

"Going forward, our campaigns will be much shorter. We'll wait until much closer to our game's launch before we start showing things like trailers, demos, or going in-depth about the mechanics," said CD Projekt's SVP of business development. Michal Nowakowski said in a recent presentation.

"Of course that doesn't mean small teasers for new projects will stop. When it makes sense, we will still tease future projects at an early stage, but the actual campaign will wait closer to launch."

CD Projekt will now adopt a more transparent approach and show off their games running on all platforms. CD Projekt purposely hid Cyberpunk 2077's PS4 and Xbox One performanceso gamers--and investors--wouldn't see how poorly it ran on old-gen hardware. This led to massive controversy that triggered a stock dive, which led to multiple lawsuits.

Obviously, CD Projekt wants to avoid this at all costs.

"When campaigns do start, we aim to properly manage expectations across all platforms. This means focusing on communication on polished game footage, not concepts We'll also showcase footage of our games on all platforms they will be released on."

CD Projekt RED will also relay its current plans in an annual roadmap, instead of the 5-year plans they've done in the past.

Cyberpunk 2077 was revealed some 7 years before it released. The game changed a lot in that time and went through many shifts between its E3 2018 demo and the final release. CDPR caught flak for showing details and content that simply wasn't realistic nor in the final game, and now the devs promise to avoid that mistake again.

Right now CD Projekt is currently working on a number of projects, and plans to transform into a studio that works on two projects in parallel: