ZeniMax Online currently has 52 job openings available across its Maryland, Texas, and San Diego branches, and is clearly ramping up for big new projects. 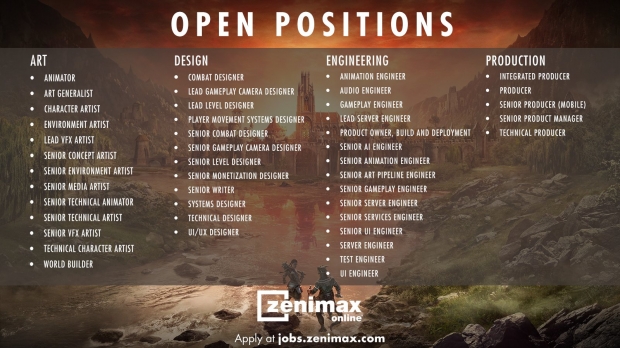 The Elder Scrolls Online developer ZeniMax Online has been working on new projects for a while now, but the recent $7.5 billion acquisition from Microsoft will help accelerate these new games. The developer recently shared a post reminding everyone it's hiring a ton of people for these new projects. At the time of writing, the company has 52 job openings available that range from senior level designers to server engineers; 6 of them are for ESO, and the remaining 46 are for the "next AAA project."

We've actually known about the new project since 2018, and it should be a new MMORPG built with a fresh engine overhaul. The listings assert it'll be a AAA experience. There's also strong evidence it's set in a new IP, and speculation insists it could be a Starfield MMORPG.

No details have been confirmed just yet and we probably won't hear more about the mystery game until Microsoft is ready to announce it during a special showcase, possible E3 or The Game Awards.