Blizzard is commercializing its 30th anniversary with a series of microtransaction packs that "celebrate" decades of gaming. 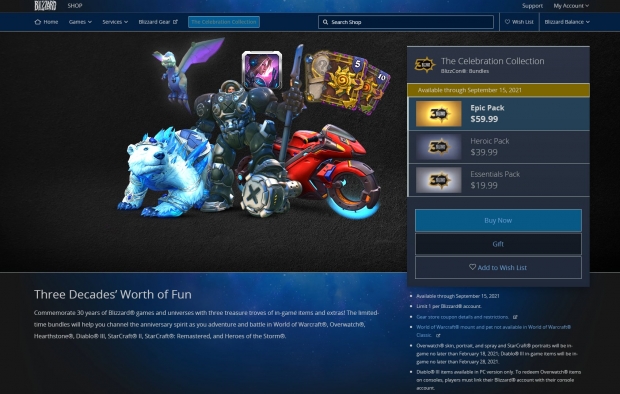 Blizzard has tried to monetize practically every facet of their games using tactics like cosmetics, lootboxes, and even Diablo III's dreaded Real-Money Auction House. Now the billion-dollar developer is monetizing its own 30th anniversary celebration.

In a recent blog post, Blizzard outlined key details on the free BlizzCon event going live on February 19-20. In the post they mentioned gamers can scoop up some in-game goodies to commemorate Blizzard's 30-year legacy of gaming. In 2021, Blizzard will indeed by 30 years old.

What the post didn't really mention is these packs aren't free. They're literal microtransaction packs that range from $20, the price of a PlayStation Hit title on PS4 (or a decent game on sale), all the way to $60, the price of a brand new game. To be fair the $60 Epic Pack does come with 30-days of World of Warcraft game time.

This seems to underline Activision's continued ebbing of Blizzard's core business and overall ethos and pursuing every possible avenue of generating revenue. Blizzard is already a powerhouse that routinely earns billions every year despite not releasing any new games.

Let's hope Blizzcon 2021 is packed with awesome reveals and information befit of a 30th birthday celebration.

Here's what the packs include:

The Celebration Collection: Essentials Pack ($20) lets you get in on the fun with:

The Heroic Pack ($40) contains everything in the Essentials Pack, plus these universe-spanning extras:

For those who want to go for the gold, the Epic Pack ($60) is a great way to stay in the game and round out your existing collections, and comes with everything in the Heroic Pack plus: