Cyberpunk 2077 takes up 101.9GB of space on the PlayStation 4, and if you have a next-gen console, your space is even more limited. 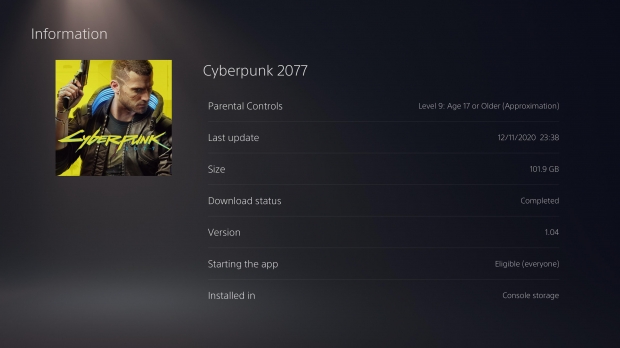 Cyberpunk 2077 is a big game. The physical version comes on two discs and it clocks in at ~70GB at launch, but that quickly skyrockets to 101GB after the day one update. Cyberpunk 2077 joins the ranks of storage-hungry games like Red Dead Redemption 2 (100GB+) and Black Ops Cold War, which requires a staggering 145.8GB on the PS5 without Warzone installed.

CDPR's new FPS-RPG is best played on PC, but if you have to play on console, you want to do it on PS5 to hit 60FPS and not the PS4 or PS4 Pro--the former of which drops as low as 15FPS and the latter is capped out at 30FPS. There's just one problem: The PS5's SSD space is limited. Luckily Cyberpunk 2077 doesn't load tremendously faster on PS5 (about 44% faster with saves loading in 24 seconds) so you can pop CP2077 on an external HDD and play it on the PS5 that way.

If you do install Cyberpunk 2077 on the PS5's SSD, it'll take up roughly 15% of the console's total install space. Remember, the PS5 only has 667 of usable storage space.

Still, these massive games show that ultra-fast storage doesn't mean anything if you don't have any free space to install anything.