Cyberpunk 2077 runs poorly on base PlayStation 4 consoles and can drop to as low as 15FPS. Luckily the game is drastically improved on the PlayStation 5.

The boosted FPS takes away from other parts of the game, though. Population density in Night City is reduced on PS4 Pro/PS5 when running at 60FPS. Heavy use of temporal anti-aliasing and film grain make for blurry graphics, too.

The Xbox Series X, however, has two modes: Quality, which caps out at 30FPS with boosted native resolution (1512p - 1728p), and Performance, which prioritizes FPS. The Series X uses the Xbox One X profile as a baseline, and we know the Xbox One X is marginally more powerful than the PS4 Pro.

Conversely, the PS5 boosts the PS4 Pro settings and unlocks the frame rates.

Once CD Projekt RED releases next-gen optimization patches we'll see the discrepancy between the two consoles even out more (despite the Series X having a ~2TFLOP GPU lead over the PS5). 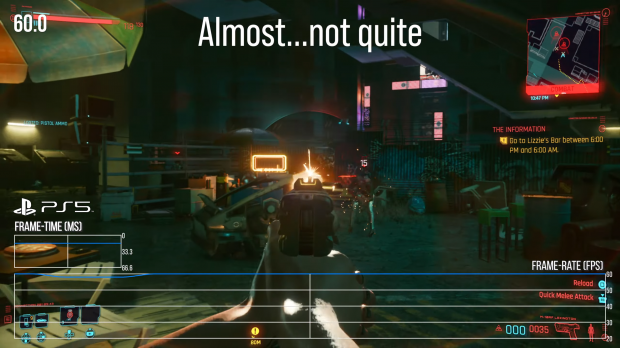