In Death: Unchained, one of the top titles on the Oculus Quest platform, just got a new game mode that expands the game in new ways. The developer described the Siege of Heaven DLC as a "game within the game" that adds further depth and challenges to the already excellent title.

The Siege of Heaven DLC adds a new mode called gate defence, which, unlike the standard game, is a stand-your-ground type of shooter. In Siege of Heaven, the enemies come to you; you don't need to find them.

Superbright, the development studio behind the game, said that the new gate defence mode is much easier for newcomers to jump into. The rounds are short, at 15 minutes per battle, and you don't need to learn movement mechanics to play the game because you're defending one spot.

"We know the main game can be seen as scary and hard. With this new mode we focused on what everyone loves - the shooting among the beautiful floating worlds. Existing players will get challenged, but everyone can now hand the headset to your friends and family so they can enjoy it too. We're hoping to make Unchained a must-have Quest title - whether you're a serious player or a casual enthusiast looking to try some of the best their headset can do," says Superbright's CEO Wojtek Podgorski.

"We've combined Unchained's archery mechanics you know and love with new challenges that require new tactics and skills. It's basically a new game-within-a-game, with its own depth, we see it as a celebration of skillful shooting, and we're rewarding players for all sorts of impressive performances."

In Death: Unchained Siege of Heaven is available now. If you own the game, all you need to do is update it. And if you don't own the game, you can pick it up on the Oculus Store for $29.99. 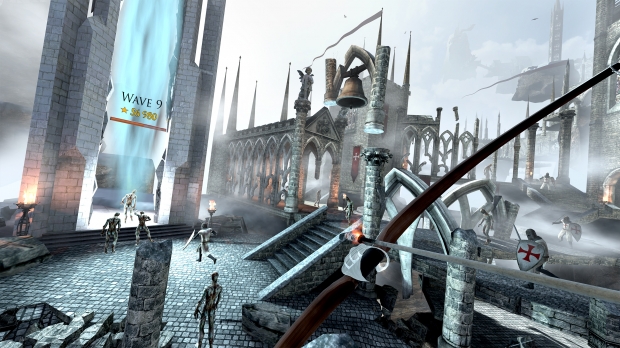