NewsReviewsArticlesGuidesGamingAsk the ExpertsNewsletterForums
GIVEAWAY: Sabrent Rocket Q 8TB NVMe PCIe M.2 SSD worth $2000!
Toshiba is first out with a notebook based on the new 8700M GT GPU from Nvidia and it looks like a real stunner. Apart from the new GPU which Toshiba has paired with 256MB of GDDR3 memory, the Dynabook Satellite WXW also features a Core 2 Duo T7300 processor clocked at 2GHz as well as either 1 or 2GB of DDR2 RAM. It's based on the Intel PM965 chipset and comes with a 120GB SATA hard drive. It has a 17-inch widescreen display with a native resolution of 1,680x1,050. 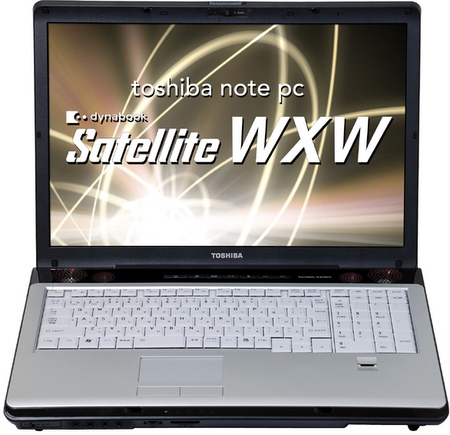 There's also a built in TV-tuner, a Super Multi DVD drive, HDMI and a 1.3Mega pixel web camera. Other features include an Express Card 54 slot, a multi format card reader for SD, SDHC, MMC, xD and MemoryStick, S/PDIF out, and a four pin FireWire port. It has no less than six USB 2.0 ports and it does of course have support for 802.11 a/b/g wireless networking and Gigabit Ethernet. A finger print reader is also part of the package.

The Dynabook Satellite WXW measures 399x288x52 (WxDxH) and weighs 3.9kg. The batter should last about 2 and a half hour. The 1GB version should cost around US$ 1,798 and the 2GB model comes in at US$ 1,945, not exactly a cheap machine, but there's a lot of hardware there for your money and if you live in Japan you can pick one up from the 13th of June.