Sonic the Hedgehog helped SEGA make an everlasting mark on console gaming. The Blue Blur is still contributing to this day, and has pushed some seriously big numbers.

According to the latest figures from SEGA, the Sonic franchise has sold a total of 800 million units worldwide. This is a big number that's over 2x Grand Theft Auto's lifetime sales. So what gives? Did Sonic games really sell that much? Yes and no.

The term "sales" is a bit misleading. The 800 million figure actually includes games, toys, pachinko/pachislot machines, and F2P game downloads. Actual Sonic The Hedgehog game sales sit at about 80 million+ (around 78 million as of 2015, not including digital re-releases, and only includes platforms up to Xbox 360). The bulk of this figure is likely made up by F2P game downloads. F2P games technically aren't really sales but can generate revenue nonetheless.

Second in line would be pachinko machines and toys, which are huge in Japan. SEGA recently spun off its pachinko games division in effort to curb substantial losses in its arcade business. 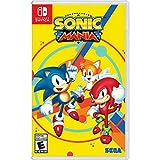