The Star Wars franchise has always been part of virtual reality. The Trials on Tatooine experience was one of the first pieces of content available for the Rift and Vive back in 2016. Since then, we've seen several new experiences on many VR platforms, including PC VR, standalone VR, and even exclusive arcade content. 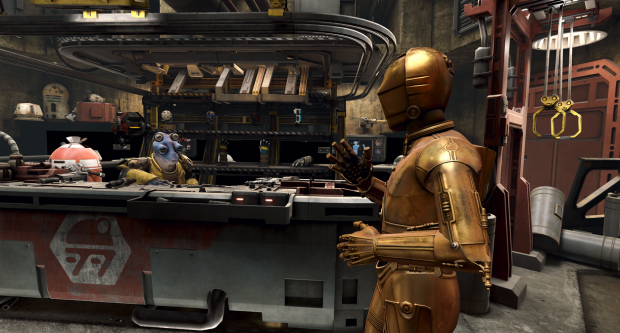 Star Wars: Tales from the Galaxy's Edge is ILMxLAB's latest VR experience, and this one looks to be a much more ambitious project than past endeavours. The game takes place "hundreds of years" before the events of The Phantom Menace, on a remote planet called Batuu. In this game, you play a droid repair technician who needs to escape the clutches of ship pirates.

Later you'll take on the role of Jedi Padawan Ady Sun'Zee, who gets to fight alongside Master Yoda himself. You'll also meet C-3P0 voice by none other than Frank Oz, who voices the movie's character.

Star Wars: Tales from the Galaxy's Edge is available now for Oculus Quest. This is just the first installment. ILMxLAB said a follow-up is scheduled for release in 2021.