Microsoft exec Tim Stuart confirms PlayStation gamers will still be able to play future Bethesda games. But they may have to wait, and some content may not be available. 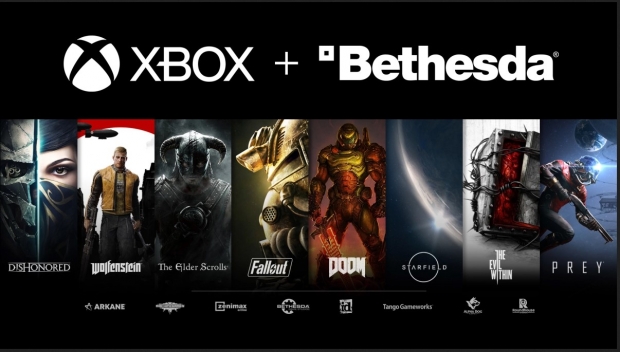 Microsoft spent $7.5 billion to buy Bethesda for one reason: Content. Xbox is now a service-first ecosystem, and content drives services. How and where that content is distributed makes all the difference. Luckily for PS gamers, now-Microsoft-owned franchises like Doom, Elder Scrolls, and Fallout won't be 100% exclusive to Xbox. Microsoft confirms these games are still coming to PlayStation consoles.

But how, when, and in what capacity are still unknown. At the Jefferies Interactive Entertainment Virtual Conference, Microsoft Chief Financial Officer Tim Stuart strongly hints that new Bethesda games like Starfield and The Elder Scrolls VI could come to Xbox consoles first, and PlayStation later. It may not stop there. Bethesda games could get extra features and content on Xbox and PC that are not available on PC, possibly including in-game performance optimizations and items.

This could also affect mod support, one of the most important developments Bethesda has made for its console titles.

Here's what Stuart said at the event:

"When we think about Bethesda, [we're] continuing to allow--I'll say allow--but continue to sell their games on the platforms that they exist today, and we'll determine what that looks over time. It will change over time. I'm not making any announcements about exclusivity or something like that. But that model will change."

This isn't the first time we've heard Microsoft or Bethesda say things like this. Todd Howard hinted The Elder Scrolls 6 wouldn't be Xbox exclusive, and back in September, Phil Spencer said games would come to other platforms on a "case-by-case basis."

Here's what Stuart said when directly asked if Doom and other IPs would be Xbox exclusives:

Another question we're getting from the line here is with the acquisition of Bethesda, is the plan to make certain Bethesda franchises, like Fallout and DOOM, exclusive to Xbox? Or will you still support cross-platform play?

Yes. The goal here is, we're--I'll say it from a cross-platform perspective. Microsoft is a platform. We're one of the first to really support Minecraft, Roblox, Fortnite across platforms. So we highly encourage cross-platform play simply from this landscape of...if it's good for the gaming ecosystem, it's good for us. The classic 'rising tide lifts all boats.'

What we'll do in the long run is...We don't have intentions of just pulling all of Bethesda content out of Sony or Nintendo or otherwise. But what we want is that content, in the long run, to be either first, better, best, or pick your differentiated experience, on our platforms.

We will want Bethesda content to show up the best on our platforms.

So again, I'm not announcing pulling content from platforms one way or the other. But I suspect you'll continue to see us shift towards a first or better or best approach on our platforms.