Fall Guys has now sold more than 10 million copies on Steam, rivalling some of the biggest indies on the market. 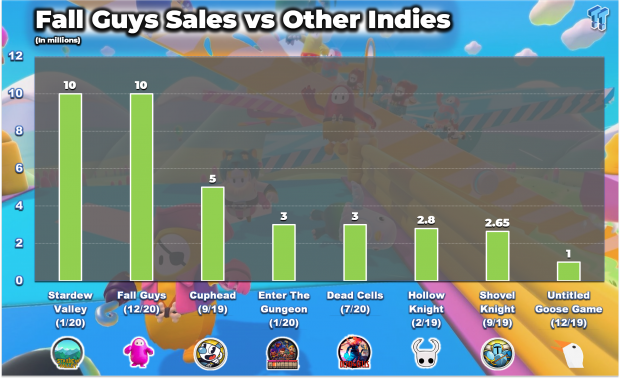 Unity is now publicly traded, and that means its quarterly earnings reports can be seen by everyone. In its first public Q3 brief, Unity confirmed Fall Guys has sold over 10 million copies on Steam. Fall Guys is made by Unity, so the engine-makers are eager to tout these milestones.

"Biggest Q3 gaming blockbusters powered by Unity. Since its August release, Mediatonic's Fall Guys, which was not only created with Unity, but also uses Unity's Operate Solutions to run the game, has sold more than 10 million copies on PC via the Steam game store and became the most-downloaded title on Sony's PlayStation Plus subscription service in history. Genshin Impact, a multi-format, free-to-play game from miHoYo, had 10 million mobile downloads in its first day of release and GTFO, by 10 Chambers Collective, secured players in more than 140 countries and rose to the top 10 in South Korea on Steam."