Turn10 is known for pushing Xbox hardware to its limits. Forza 7, for example, hit native 4K 60FPS on the Xbox One X, an older Jaguar-based SoC refreshed to 14nm with Polaris and splashes of Vega. So imagine what they'll be able to do on a 7nm SoC with a 12TFLOP Navi GPU complemented by other synergized components? On Xbox Series X, Microsoft promises the new Forza will deliver native 3840 x 2160 resolution at 60FPS with ray tracing turned on.

We have no idea how they'll hit this kind of perf, but we do know the console's new Velocity Architecture will play a big part.

"One studio that has always pushed the limits of our hardware is Turn10. They're early in development on the next Forza Motorsport, and Xbox Series X is bringing them closer to their dream of unprecedented realism with raytracing and native 4K resolution all at 60 frames per second," Xbox boss Phil Spencer said during the big new Xbox games reveal stream.

There's just one catch: The new Forza won't be ready for years to come. And it's not coming to Xbox One. Instead, the next-gen Forza is being specifically developed for next-gen systems so it won't be held back by inferior and outdated Jaguar chips.

"The new Forza Motorsport, currently in early development, is a reimagining of the series. We are taking what has made Forza Motorsport great over the past 15 years and pairing it with new game concepts and new technologies.

"With the new Forza Motorsport, ray tracing is coming to ForzaTech, you will see a dynamic world in 4K, 60fps, that is connected and dynamic - from surfaces of cars reflecting off each other, to brilliant red paint bouncing off intensely detailed track surfaces, and the interplay of light and shadow throughout the world. Developed by Turn 10 Studios, Forza Motorsport will be available on Xbox Series X, Windows 10 PC and on Xbox Game Pass." 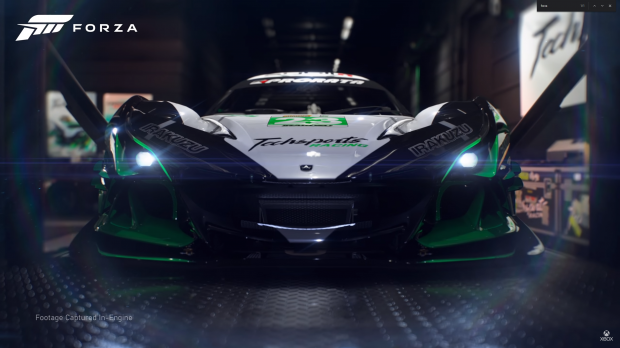 The Xbox Series X's hardware is impressive, but what's even more impressive is the software and engine environments that developers now have access to. The console's new Velocity Architecture, which underpins the hardware and gives devs unprecedented levels of control, granularity, and ability with their games, will enable some pretty crazy things.

It's clear that Turn10 is taking its time to make an Xbox Series X spectacle game, while also iterating on the architectures, OS, and engine that powers the project. Remember that all first-party developers benefit from one developer's innovations, and Microsoft's entire stable of studios work together on iterating the software environments. Turn10's new skills and hardware/software utilization will empower devs like Obsidian or even 343 Industries, and vice-versa.

We don't know when the new Forza is coming out, but it's currently in early development so don't expect to see it before 2021 or maybe even 2022. Microsoft has said all first-party games will release on Xbox One for a few years, so 2022 is more likely.