Acer has pulled the covers off of several different notebook and desktop computers today, including a new Chromebook. The machine is called the Acer Chromebook Spin 713, and there's a version called the Chromebook Enterprise Spin 713, with both machines being virtually identical. Both are powered by 10th generation Intel Core commercial processors promising superior performance with the Chrome OS. 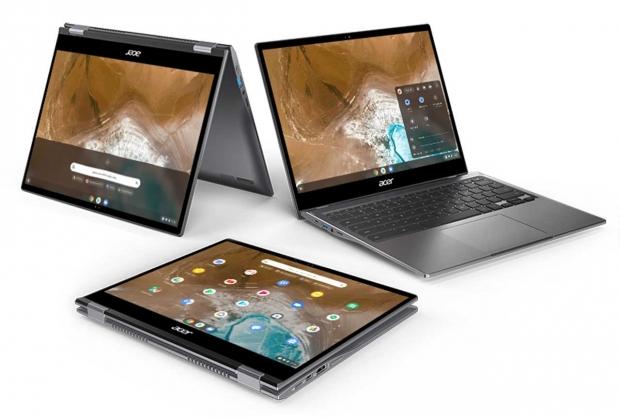 Acer says that the new machines, "...deliver the latest in connectivity, productivity, performance and platform stability, designed to enable the superior productivity and performance that businesses need when working in the cloud. It brings together cutting-edge hardware, specs and design with the speed, security and simplicity that Chrome OS is known for." The new Acer Chromebook was part of Intel Project Athena and features a 2K resolution 13.5-inch VertiView display.

The screen has what Acer calls a "productivity-boosting" 3:2 aspect ratio that creates extra vertical space and reduces scrolling. The native resolution is 2256 x 1504 and has 18% more vertical screen space than normal displays. Both the touchscreen and touchpad are covered with Corning Gorilla Glass to resist scratches. The screen also features then bezels for a higher screened body ratio.

Acer says that Project Athena is an Intel innovation program designed to incubate and deliver the most advanced laptop experiences and designs possible. Other features include dual integrated stereo speakers and dual microphones. The thin Chromebook meets military standards for resisting dents, dings, and corrosion. It's able to survive drops from heights of up to 48 inches and withstand up to 132 pounds of downward force. The machine is also a convertible with a full 360-degree hinge giving four different use modes. The keyboard is backlit, and the machine weighs 3.02 pounds. It also has plenty of connectivity options. The Chromebook Spin 713 will launch in July, starting at $629.99, with the enterprise version launching in August for $1099. In April, Acer announced the Predator gaming notebook with RTX graphics.