HP has announced a new Chromebook that's aimed directly at enterprise users. The machine is called the HP Elite c1030 Chromebook Enterprise and has a 13.5-inch 3:2 aspect ratio display. HP brags that the screen has a 90.1% screen-to-body ratio, which is the highest ever on Chromebook. 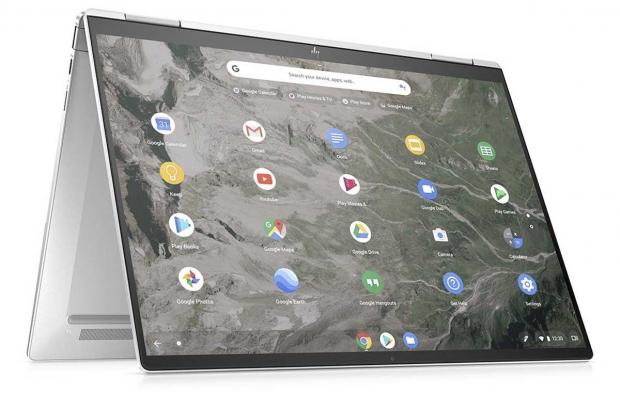 A low screen-to-body ratio means that the display has very thin bezels. Under the hood, HP uses the latest 10th generation Intel processors promising high performance and utilizing an active-cooling system. The active cooling system will keep the machine running optimally during multitasking and video conferences.

The internal battery is good for up to 12 hours of use per charge, and the machine has a hinge that allows the display to be folded back like a tent. The portable is the world's first Chromebook that has an integrated privacy screen using HP Sure View Reflect technology that keeps people from being able to read your screen over your shoulder at the present button. A fingerprint reader and integrated webcam privacy switch are also integrated.

The HP Elite c1030 Chromebook Enterprise came out of the Intel Project Athena program and features Wi-Fi 6 with HP Extended Range Wireless LAN and optional LTE connectivity. HP builds the chassis out of 75% recycled aluminum, the keyboard is made from 50% recycled plastics, and the speakers use ocean-bound plastics in their construction. HP says that the HP Elite c1030 Chromebook Enterprise will launch in August with pricing announced closer to availability. Lenovo launched its own new Chromebook recently called the S340 that is available for $250.