I want to clear up some confusion I have seen speculated online, and that is that Comet Lake is 14nm, it is not 10nm, although it is 10th gen, it is still on 14nm node. This is not necessarily a bad thing as Intel is again pulling some impressive frequency form the aging 14nm node, but this may be the swan song for the 14nm tech.

Introducing the new Comet Lake Architecture, Intel has made a substantial improvement once again to its mainstream lineup. Each CPU generation has tacked on two more cores as of recent, looking back to Kaby lake with the 4C/8T core i7 7700K. Next, we have Coffee Lake with the Core i7 8700K at 6C/12T. Next was the Coffee Lake refresh, which brought us the current mainstream beast the Core i9 9900K, which is 8C/16T of processing power with a boost of up to 5.0GHz. Please note that the NDA on performance reviews will be later in the month, so for now, we can only share some intel provided information and comment on it with our thoughts. 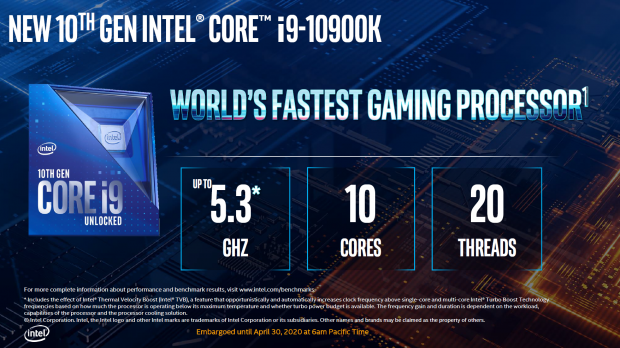 Not willing to give up ground to the absolute pounding AMD Ryzen has been giving to Intel's mainstream lineup, we are at it again, this time with the Core i9 10900K, a 10C/20T monster with a boost speed capable of up to 5.3Ghz. As you can see from the intel slide, the newest flagship is set up to be a major beast, but let's dig in a bit further and see what else Intel has given us to talk about. 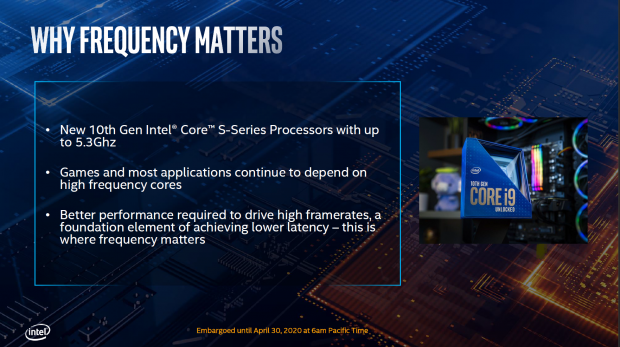 Here we have Intel explaining why higher CPU frequency can make a real difference for your experience. Intel is right in some of these points, such as the fact that many games benefit directly from frequency; however, this is also an aging laurel, as many game engines are becoming multi-core aware, and games are starting to show it by scaling performance beyond a single core. 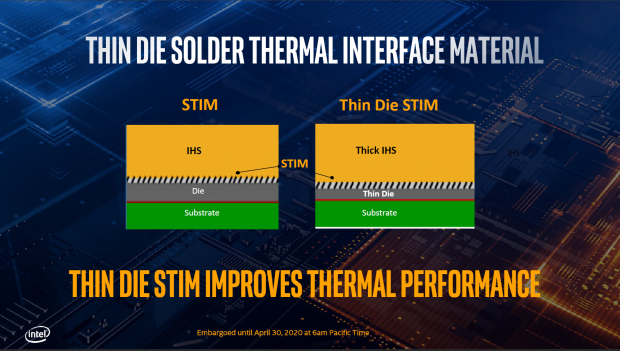 You know the adage, how a sausage is made? Well, this is how the sausage is made, so to speak in regards to the new 10th gen chips. This image sheds some light on how Intel has taken the aging 14nm node and squeezed it not just to pack in more density, but also to push even more frequency out of it. As you can see, Intel reduced the Z height of the die, which means they have a thinned diffusion barrier that will pay dividends via a quicker transfer of heat from the die to the IHS. Also worth noting is that to keep a similar installed height, Intel thickened the IHS, which means that it can even sink more heat away from the die quickly. This is the magic behind the claimed up to 5.3GHz speeds, and, of course, you will need a beefy cooler to keep the thermal density packed into this chip tamed. 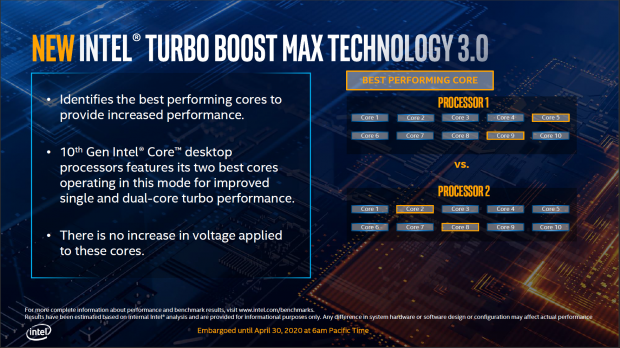 Intel also enabled Turbo Boost Max 3.0 on the 10th gen, which means the software layer can detect the two best cores and automatically allow them to improve performance in both 1T and 2T loads. I do like that this is accomplished without hidden bumps of voltage, but instead is genuinely using the best-binned cores from the CPU. 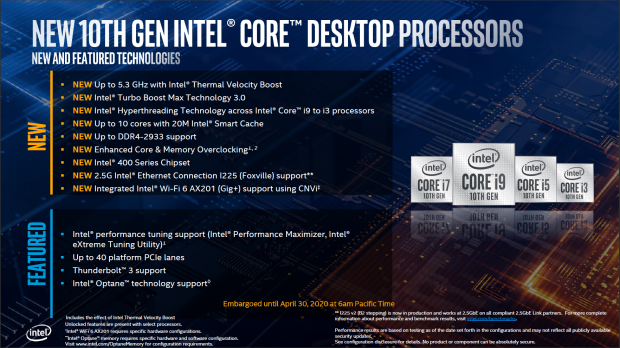 Here we have a breakdown of some of the new features on the 10th gen. First up is the notation of the up to 5.3GHz from thermal velocity boost, which, as I mentioned, means you will want this CPU to be as cool as possible to get maximum performance from it. Also worth noting is that hyperthreading is now enabled across all Core processor models even down to i3. Intel also nudged up the JEDEC or default supported memory speed which is now 2933MHz, but as we have seen form, several boards, they are rated up to 5000MHz, and higher, so we have to assume the IMC's are good. 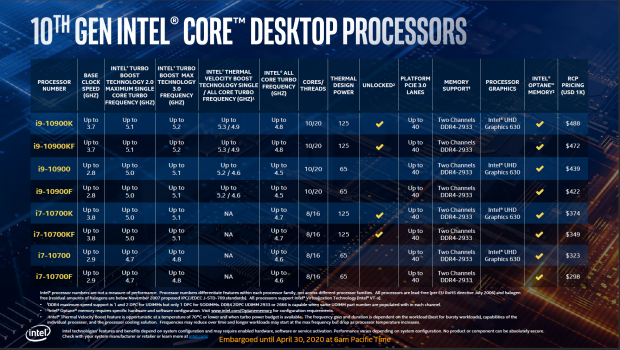 Now we get to the meat of what Intel is bringing to market with the new 10th gen desktop processors. The king of the hill is the 10900K, which will take the halo position from the outgoing 9900K. As you can see, the stated TDP is now 125W for the unlocked SKUs both in the i9 and i7 variants. Also worth noting is that the thermal velocity boost is only available on the i9 deca-core parts. The i7 variants move up to 8C/16T parts, which is quite the step up from the last generation. The base clock may look a little troublesome, but once we can get hands-on with these chips, we will see how often the CPU, if ever, drops this low. The 10900K is listed as $488 for 1K, but there is no stated MSRP, so we will have to wait and see what the actual market price is when these are on the digital shelves. 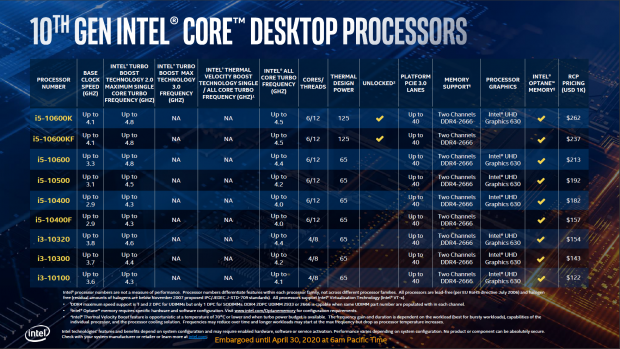 Next up, we have the i5 and i3 models sporting 6C/12T and 4C/8T, respectively. I must say once again; it is nice to see hyperthreading and respectable core counts on these new chips even at the lower-end as it makes more affordable and viable solutions for budget enthusiasts and gamers. 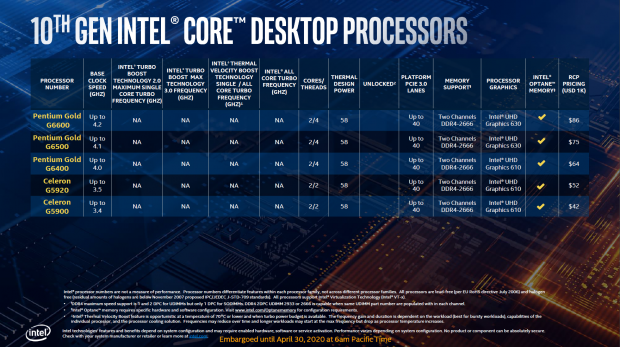 I know many of you may not be excited by these, but the Pentium and Celeron models are also getting the 10th gen treatment. While some of you may never even look at these, but for a small file server or media center solution, these can be great chips that can use Quicksync for transcoding your video streams or for multiple other use cases where you do not need a high-end CPU for heavy lifting. 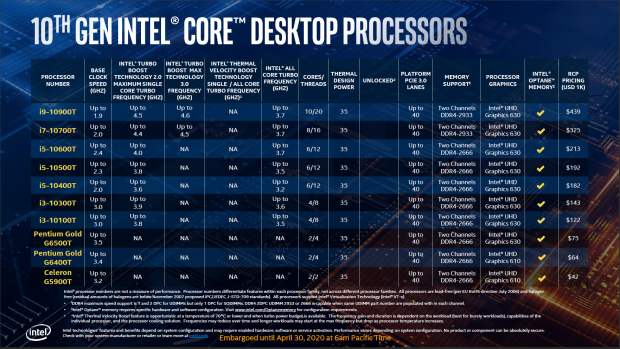 Next up, we have the low power CPU options form Intel, which there are several. One thing to note while the boost speeds may seem rather good for the stated TDDP, keep in mind that the base clock is quite low and being low TDP, means under heavy sustained loading, the clock speeds will drop quite a bit to maintain the PL based on UEFI settings. 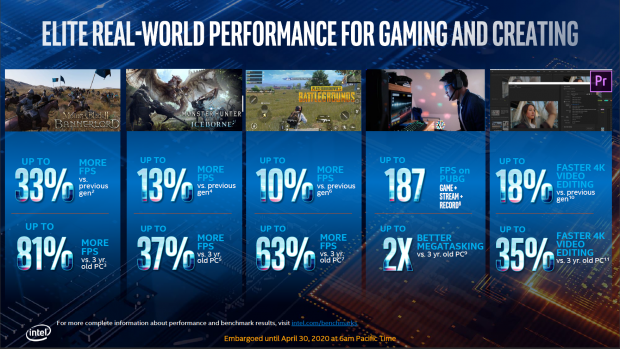 I wanted to talk about the CPU stuff before I dove into the marketing claims. Here we have the all-in-one slide showing some of the best beats for the new 10th gen processors. These are some substantial claims, but when looking at the bottom row, which is comparing to a three-year-old PC, keep in mind that it is a 7700K based machine. The top-end 10900K has 150% more cores and also a much higher available turbo clock. This is on top of the various other ways that Intel has optimized the architectures over the years, such as cache hierarchy and other optimizations. These are tangible gains as the top row is against the existing flagship 9900K. 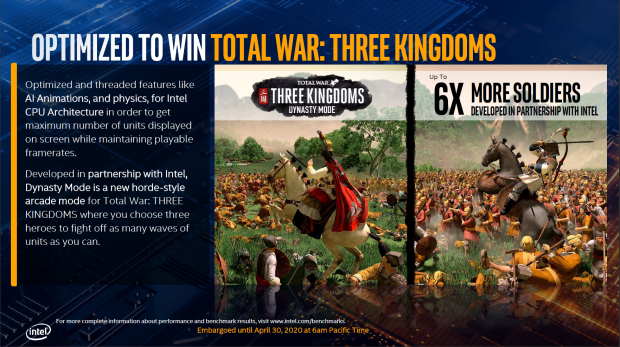 Now we are rounding home stretch, but I did find a couple of cool slides about game optimizations Intel has worked with partners on. This one being Total War: Three Kingdoms. This Intel worked with the team on the game to add a horde-style mode in which Intel's AI tech is claimed to allow for more than 6x the number of soldiers on the battlefield. This is interesting, but I would like to see the same mode on other CPUI options, such as the outgoing 9900K, to see the delta between the two. 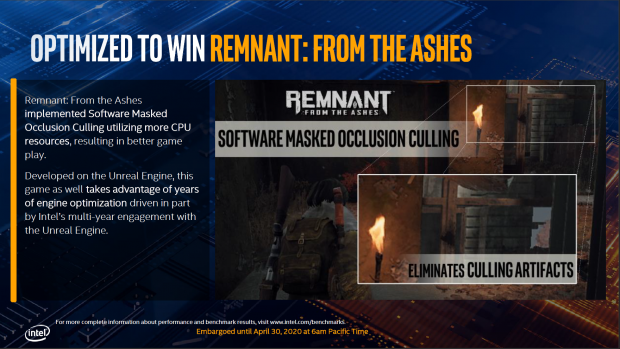 This is the last Intel provided slide I will share, and it is of work Intel did with Remnant: From the Ashes. Intel leveraged years of work with the EPIC team to improve specific features and interoperability with Intel's core architecture. This has reaped a claimed benefit in the aforementioned title by running Software Masked Occlusion Culling on the CPU or helped by the CPU and using the available horsepower to filter and remove culling artifacts. For any of you that think "that is a lot of words and I don't know what that means" well you are not alone, I'm sure there are many. However, in basic terms, Intel is trying to work with game developers to enhance their engine tech to better utilize their available CPU resources to make for better gameplay experiences.

And there you have it, for now at least. There is not much we can discuss as far as performance yet, we have to wait until later in May when we can share our full review and share our experience with the new 10th gen platform.