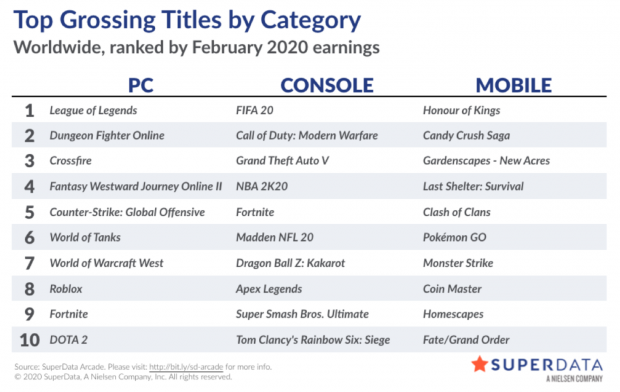 February 2020 was an interesting time for the digital games market. Mobile took the lead with a substantial 16% spike in earnings, contributing the lion's share of the total $9.2 billion earned in the month. PC and console spending was down quite a bit due to the absence of heavy-hitters like Anthem and Apex Legends. PC spending was down 6% YoY and console dropped a staggering 22% year-over-year, the firm reports.

The top 10 charts for each segment are predictable enough. We see a number of F2P games dominate the PC charts, with games like Dungeon Fighter Online and CrossFire being popular in Asia. League of Legends secured the top spot for digital earnings in the month.

Console is pretty interesting though. The games themselves aren't surprising, but their rankings are: GTA V sits at number 3 and continues going strongly seven years after release. In fact, GTA V earned more than Fortnite in the month, but FIFA 20 was the crown champion followed up by Modern Warfare.

Remember this was before COVID-19 had a significant impact on the economics of physical vs digital gaming. Now that everyone is stuck indoors in quarantine zones across the world, digital should spike tremendously.

March 2020's figures should be pretty eye-opening to say the least. So far we've seen huge indicators that March's digital earnings will surge. Not only are big games like Animal Crossing: New Horizons and Doom: Eternal blasting onto the scene, but consumers now have more direct access to gaming as they work from home amid the coronavirus outbreak.

Call of Duty Warzone, the new free-to-play BR, has amassed more than 30 million players in less than a month. Counter-Strike: GO's numbers have swelled significantly to over 1.1 million concurrent users, and in February alone the game managed to hit 24 million MAUs, which is roughly 27% of Steam's total monthly userbase.

Steam's total concurrent users also blasted up to over 22 million users for the first time in history.

PS Plus, Xbox LIVE, even the Epic Store should likewise see a mass influx of players, premium digital game sales, and monetization earnings throughout March 2020.