Modern Warfare's new 1.14 patch update is as big as a full AAA game, and may include assets for the upcoming battle royale mode.

Today Infinity Ward rolled out Patch 1.14 for Modern Warfare's big second season, and it's a doozy. The update clocks in at 51GB on PS4, 68GB on Xbox One, and 67GB on PC. A lot of the update replaces existing files in the game while also adding new season 2 content like maps (Rust is coming back), operators (Ghost is back!), weapons, modes, and more.

What's particularly interesting is the disparity between the 1.14 patch notes and the update file size. There's really no reason for it to take up this much space...unless it also includes Modern Warfare's anticipated (and leaked) battle royale mode. Infinity Ward placed several BR hints in the game, and there's a new section marked classified in the startup menu.

The update is now live along with season 2. Infinity Ward has yet to confirm or announce Modern Warfare's battle royale mode, but expect it to happen. Activision-Blizzard is doubling-down on engagement strategies right now, and a cross-play BR mode in the massively popular shooter will help boost numbers quite a bit.

Check below for Update 1.14 patch notes:

Regiments! (check them out in the Social menu!)

* A note from the team: Bazaar and Gunfight Tournaments will go live later in the season!

Fix for the "Focused" challenge not tracking properly

Added back into rotation

Changes to Krovnik Farmland in the Modern Warfare Season 2 update.

Fix for a rare bug that could prevent players from accessing the barracks, weapons, and/or Operators tabs after matches

Trophy System: Deploy time has been reduced by about half a second

Fixed a bug that allowed players to get infinite Weapon Drops by cancelling Killstreaks. Killstreaks are no longer usable when the Weapon Drop grenade is equipped

Fixed a bug where objectives were not giving Field Upgrade progress

Overkill: Switched places with Killchain and will now be in Perk 2

Restock: Change the equipment recharge rate from 30 to 25 seconds

Pointman: Increase the score gain for Scorestreaks across all modes

Spotter: Added hacking ability (from E.O.D.); we're currently working on the ability to hack through walls.

Cough is no longer played when a player enters gas

Reduced blur when under gas effect

Very slight tuning to the reload speed. We're still fine tuning this one, so more adjusting is in the works!

*A note from the weapons team! The Solozero NVG Enhanced is supposed to see through smoke, but a rendering bug broke this one optic temporarily. We'll have it fixed shortly!

Operation Harbinger: Fixed an issue with a checkpoint that could cause players to spawn under the map

Added Change to Loadout keybinds for Custom Loadouts 6 to 10, allowing players to quickly switch to any of their favorite Loadouts with the press of a button.

Fixed a visual issue where highlighting the usernames of multiple people in a lobby with the mouse cursor could lead to multiple Emblem/Player Card/Level UI elements appearing and overlapping each other.

For Keyboard & Mouse Codcasters, it is now possible to bring up player Field Upgrades by pressing a key in the same way as they can with Killstreaks. This also shows the exact progress until each player unlocks their respective Field Upgrade.

Player health levels are displayed in the background of their portraits

When using the Tracker perk, footprints are now visible even when the Bullet Impacts & Sprays option is disabled in the Graphics tab 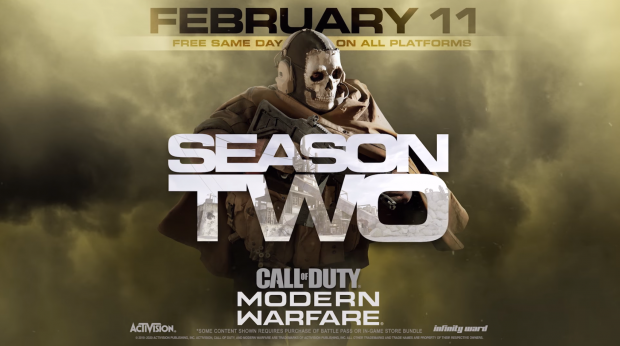