Activision makes good on its promise with content blowouts in Modern Warfare, revealing an absolute metric ton of new goodies coming to the game.

Call of Duty: Modern Warfare's season 2 content is pretty robust. Most notably we see Ghost returning to the game as a playable operator as well as the classic Rust map, complemented by a slew of new guns, modes, and maps across various gametypes.

There's a marked discrepancy between the free and paid battle passes though, and you'll have to spend 2400 CP ($19.99) on the premium battle pass to unlock Ghost. Other operators are coming to the game too via the Call of Duty Store. 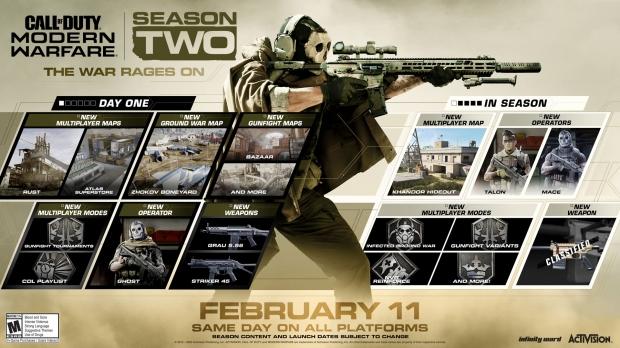 The free battle pass unlockable tiers include two weapons--the Grau 5.56 SMG and the Striker 45--and up to 300 CP, cosmetics, and other riff-raff.

Predictably it's the paid $19.99 battle pass that has all the goods. The premium battle pass has 100 tiers of unlockables, and you get access to Ghost right away alongside a new operator mission. Other goodies include weapon blueprints, XP boosts, new skins and challenges, and a max earnings threshold of 1,300 CP.