SpaceX is on its way to ferrying humans to the International Space Station, and the private space exploration company has just reached a new milestone.

SpaceX has just reached a new milestone in their quest to be able to ferry humans back and forth from International Space Station to Earth. Just a couple days ago, the Space exploration company live-streamed an in-flight test of Crew Dragon's launch escape system at Launch Complex 39A at NASA's Kennedy Space Center in Florida.

The above video (which I have skipped to 40 seconds before the initial launch) shows the Dragon capsule attached to SpaceX's Falcon 9 rocket. As the timer ticks down and the launch sequence begins, we can see Falcon 9 blasting off from its launch platform. As expected, the Falcon 9 rocket broke apart and exploded right after the Dragon detached and begun free-falling back down to Earth. Parachutes were then deployed on its re-entry before it safely landed in the Atlantic ocean.

The whole launch and re-entry was live-streamed from multiple camera angles, and if you look over to the right while the capsule is re-entering it says "HDR ON". The whole test was deemed a success, which means SpaceX is moving towards their goal of International Space Station transportation. 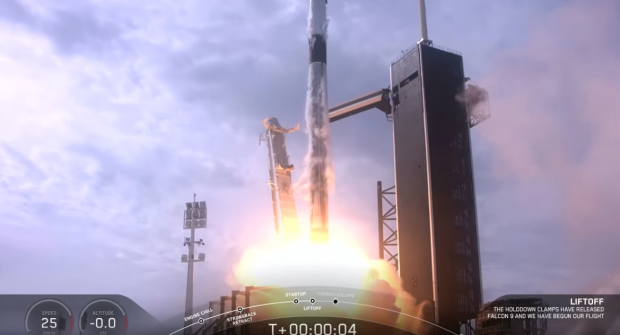