If you didn't know, every planet in the solar system spins at a different speed. This is due to each of the planet's size and mass. So how fast are other planets spinning in comparison to Earth?

James O'Donoghue, a planetary scientist at the Japanese space agency (JAXA) and a former scientist over at NASA, has comprised a short animated video that gives us a clear visualization of each of the planets rotation speed. The video shows one globe, but each of the sections of the globe is the different planets in the solar system. Each is rotating at their respective speeds.

Earth rotates at 460 meters per second or roughly 1,000 miles per hour. This is how we established that there are 24 hours in one day. The above video shows how each of the other planet's full rotations compares to Earth's relative to our star. O'Donoghue said on Twitter, "I had the idea to make this back in December last year but I didn't think people would be interested in it." Since then, the video has had over 215,000 views. 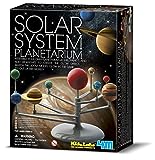