The amount of free publicity that Tesla has managed to achieve for its Cybertruck has been astounding, and must be worth billions -- with Tesla's exciting new mega-hyped Cybertruck even making it into a music video:

Tesla's new Cybertruck made an appearance in Travis Scott's new video for "Gang Gang", where Tesla's Cybertruck and its all-electric ATV in the Cyberquad make an appearance. The awesome sauce doesn't end there, with a Boring Company Not-A-Flamethrower making an appearance, too.

Elon Musk has even been spotted hanging out with Travis Scott, with a picture posted to Kim Kardashian West's Instagram, with Musk hanging out with his girlfriend, as well as KK's husband and fellow artist to Scott, Kanye West. The group were hanging out on Christmas Eve, soaking in the festivities. 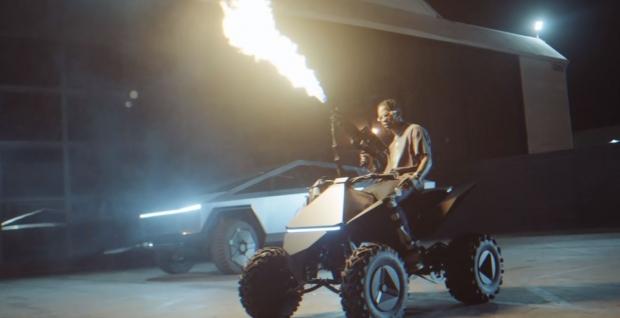 What's that? Oh that's just the Tesla Cybertruck and Cyberquad -- oh and a freaking Not-A-Flamethrower.

We don't know how Tesla's new Cybertruck and Cyberquad made it into Scott's new clip -- but however it happened, it's awesome. The video is also #9 trending on YouTube, too -- where at the time of writing it had racked up 6 million views.