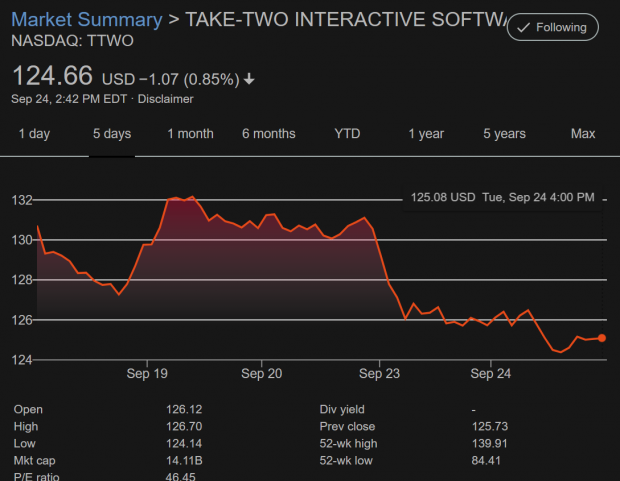 Yesterday Take-Two announced some impressive metrics behind Borderlands 3. Gearbox's sequel has shipped 5 million copies worldwide in five days, and sold 50% more copies that Borderlands 2 in the same period. Borderlands 3 is also the fastest-selling 2K title of all time, bumping the franchise to $1 billion in total earnings. It also did well on PC, becoming the fast-selling 2K game on PC in a five-day period, and outperforming expectations. But investors and analysts weren't tremendously impressed by these figures.

Since the announcement, Take-Two's stock has dropped from yesterday's $131.11 high down to $124.91 low during the time of writing, representing a 4.72% dip. The 5 million shipments (sell-in, not sell-through as in actual sales) aligns with predictions made by analysts like Wedbush Securities Michael Pachter and Suntrust's Matthew Thornton, meaning Take-Two failed to beat Wall Street guidance.

A bit of perspective on the figures: Take-Two used similar vernacular when describing Mafia III's sales in 2016, which managed to push 4.5 million copies in its first week, making it the then-fastest selling 2K Game on the market.