Watch Dogs: Legion lets you swap between multiple characters you recruit throughout the world, even unsuspecting innocent grandmas.

E3 2019 - Today Ubisoft announced Watch Dogs: Legion, the sequel set in a high-tech London filled with crime, drones, and tons of surveillance. The main selling point of Legion is its lack of a pivotal character: instead of one main protagonist, Legion lets you switch between a bunch of different characters on-the-fly. Everyone in London is a potential DedSec rebel-even old British ladies.

The gameplay footage showed that even a 75 year old grandma can be a badass hacker assassin. We saw the deadliest DedSec granny blast enemies with a huge handgun, zap them with a taser, and dish out some serious hurt. "In Watch dogs Legion, you can recruit and play as anyone. In our game, every Londoner is fully simulated, with persistent lives and habits, and anyone can be recruited. All are unique characters with backstories and skills," Ubisoft said on stage.

As fun as it is to crash through a skylight, there's not always a need to be noticed. Use the resistance's most secretive hack - an "invisibility" cloak. Thanks to the advances of augmented reality, you can sneak around without detection and covertly take down your enemies. 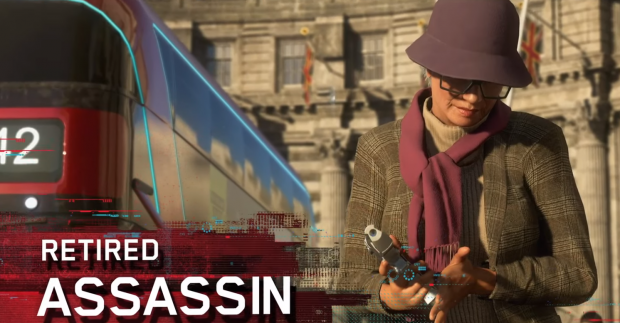