Nintendo has released their E3 2019 schedule and according to the announcement the Big N will be holding a Nintendo Direct to show off some titles as well make some major fun available in its booth.

Nintendo has taken to their official website to detail their plans for E3 2019. According to the post, Nintendo will be holding their E3 Direct at 9 a.m. PT on June 11. The presentation will be live streamed for Nintendo fans around the globe, and will focus primarily on software and more so what games Nintendo Switch owners can expect throughout 2019.

Nintendo will also be conducting their classic Nintendo Treehouse: Live at the Nintendo Booth. This live stream will give players a chance to jump into a technical analysis of some select Nintendo games with some Nintendo staff. Nintendo will also be hosting a Super Smash Bros Ultimate and Splatoon 2 tournament on Saturday, June 8th at The Theater, Ace Hotel, Los Angeles. If you are interested in anymore information for Nintendo's E3 presence, check out the official press release from the company here. 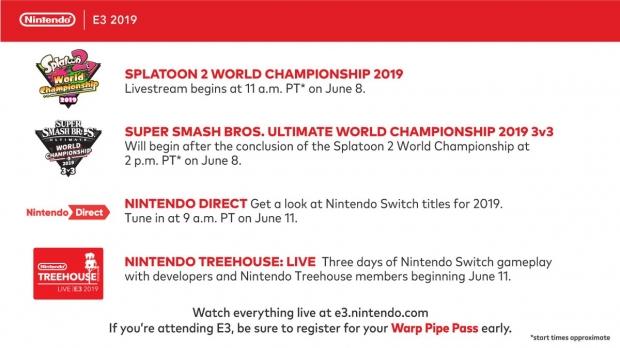