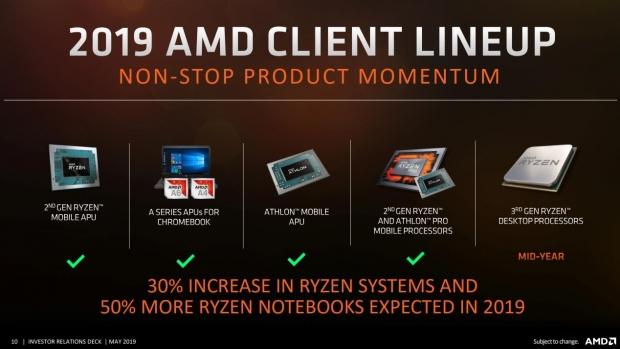 In the last 2019 roadmap image AMD had detailed the third-gen Ryzen Threadripper CPUs in its 'non-stop product momentum' which has hit a stop, and dropped momentum with the latest roadmap. The new high-core count CPUs have mysteriously been omitted by AMD, and in its place the company will most likely deploy the next-gen Zen 2-based Ryzen desktop CPUs on the new 500-series motherboards on the cheaper, simpler AM4 socket.

What does this mean for the future of Ryzen Threadripper? Well, we'll have to wait and see what AMD says and if there's an update (and yet another change) to the 2019 roadmap at AMD's upcoming press conference at Computex 2019.

AMD already has its next-gen Zen 2-based EPYC 'Rome' CPUs on the 7nm node with a huge 64C/128T coming so what would the next-gen Threadripper have to be in order to differentiate itself between the current 32C/64T from the Ryzen Threadripper 2990WX? Well first the new 7nm process will be a huge boon for energy efficiency and cramming more CPU cores and cache, the improvements from Zen 2 mount up but the biggest will come in the form of CPU clock speeds, something the 1000- and 2000-series both suffer from.

Higher-clocked Threadripper CPUs with 64C/128T would step on the higher-end but slower-clocked EPYC Rome CPUs, which means there needs to be some form of a balance. If not it tips in the favor of the new Ryzen Threadrippers needing to be absolute monsters in order to push themselves far enough from the 2990WX and not too much of an unrestricted mammoth that it fights EPYC.