On the heels of its big Borderlands 3 confirmation, Gearbox also announced a full remaster for the original Borderlands game.

Borderlands: Game of the Year Edition is getting remastered for PS4, Xbox One and PC with a host of new features. The game's visuals are re-vamped for 4K displays and will leverage the PS4 Pro and Xbox One X's higher horsepower for various in-game performance upgrades. But it's not all cosmetic: Borderlands remastered has a ton more loot than usual, and on-screen mini-map, and it'll support skins and new heads via SHIFT codes. The definitive bundle also comes with all DLC.

The most exciting upgrade is co-op, which now supports up to 4 players on a single console. "Borderlands 1 remastered will go from 2 players to 4 players. That's 4 players, split-screen, on one console," Gearbox's Randy Pitchford said at a recent PAX East presentation.

"We've had a lot of fun. We've remastered some things, like the boss fight at the end of the game. There's a hell of a lot of loot. If you like Borderlands 1, I think you're really going to dig this."

The Borderlands: Game of the Year remaster comes out on April 3, 2019 on PS4, Xbox One and PC.

"Discover the co-op shooter-looter that started it all! With new weapons, visual upgrades, character heads, gold chests and keys, plus all 4 add-on packs, you can enjoy all of the content from one of the Most Acclaimed Games of its era, now in one sweet and deliciously modern package!"

• Visually Remastered: Xbox One X and PS4 Pro, players can enjoy 4K Ultra HD and HDR, though the improved lighting, textures, and character models shine on every platform. Applies to the base game, as well as all add-on content.

• Quality of Life Improvements: Significant updates to the game's supporting systems allow for a smoother overall experience. For example:

o A Borderlands 2-style mini-map, which you can toggle on and off, has been added to complement the original compass

o Items like ammo, money, and health now auto-pick up from the ground

• Rewards Ready: With the addition of the SHiFT player rewards program, you can now use Golden Keys to unlock special in-game items and rewards. Returning SHiFT users who've played Borderlands 2 or The Pre-Sequel on PS4, Xbox One, or PC will receive 75 free Golden Keys, as well as two randomly selected all-new weapons, for their first newly-created Vault Hunter.

• Added Firepower: A new set of six named, custom-skinned Legendary weapons make the base game's arsenal even deeper. Beat bosses or gather Golden Keys for a chance to collect 'em all.

• Badder Boss Battle: In direct response to fan feedback, the campaign's final boss encounter has been adjusted to be more engaging, challenging, and rewarding.

• Cosmetic Customization: For the first time, you will be able to customize your Vault Hunter beyond simply selecting a color scheme. Each of the four available characters has five brand new cosmetic heads unlocked and equippable right from the start of the game.

• Now Available on Modern Consoles: Borderlands: Game of the Year Edition makes the original Borderlands readily available on Xbox One and PlayStation 4 for the first time, in addition to providing a newly enhanced and visually remastered version for PC players.

• Free to Existing Owners on PC: If you already own the original Borderlands on Steam, you'll be able to upgrade to Borderlands: Game of the Year Edition absolutely free.

• RPG Progression: Slay your foes, gain experience points, and build out extensive skill trees unique to each of the four Vault Hunters.

• Co-op Frenzy: Tear through the opposition as a crew of up to four, with four-player split-screen available on consoles and online co-op available across all platforms.

• Intense Vehicular Combat: Get behind the wheel and engage in frenetic vehicle-to-vehicle combat. 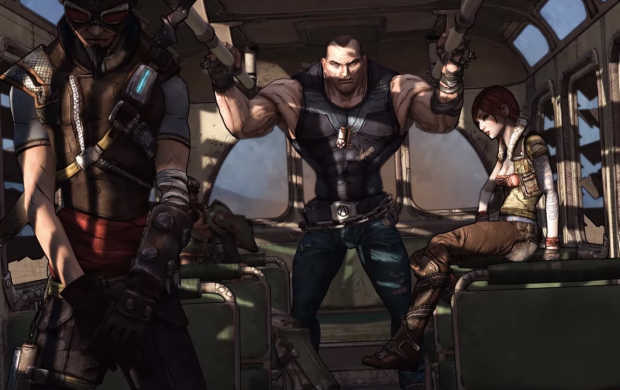