Borderlands 3 is bigger and better than any other game in the series. The sequel not only features practically every living character in the in-game universe--greats like Brick, Tiny Tina, Mordecai, Hammerlock and so many more are back--but takes us off-world to multiple unique locales, complete with their own biomes, enemies, and styles.

Guns are arguably the best part of any Borderlands game, and Gearbox is going way above and beyond here. Borderlands 3 will feature over 1 billion varieties of explosive loot and guns, some baddie-blasters even have legs.

The game introduces four main Vault Hunter classes including the Bot Jock who can summon robotic mechs, a soldier who blasts baddies with turrets, a female melee-oriented siren, and the Beastmaster who can tame pets. 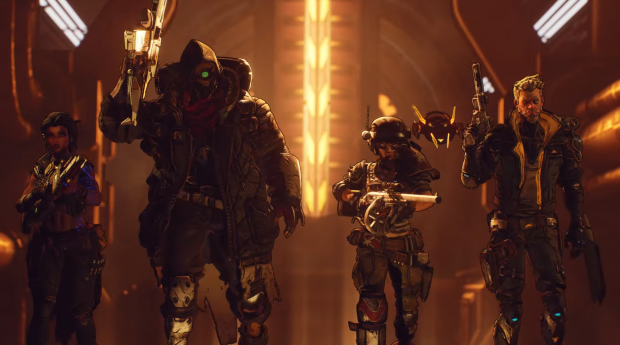 Borderlands 3 vault hunters from left to right: the new Hulkster siren, the Beastmaster, the Bot Jock, and the Operative.

Gearbox didn't reveal a whole lot about Borderlands 3 during its PAX East showcase, but the footage did corroborate a lot of the recent leaks. The devs will share more on April 3, 2019.

"Borderlands 3 has been in development in five years," Randy Pitchford said on stage.

"The team has put so much effort into this. It's obscene the amount of effort that goes into a Borderlands game. Our deepest wish is to do everything we can to make a worthy successor."

No release date was announced, but the game should launch sometime in 2019.