Capcom's Resident Evil 2 Remake demo is one of the best slices of survival horror I've played yet. Here are some quick impressions that underline why I'm excited about the final game. 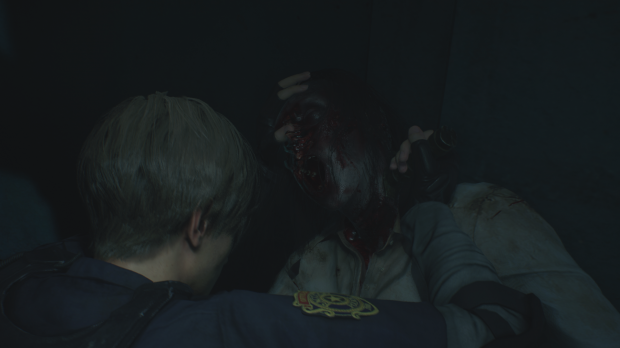 Any good horror game makes you feel like you're in another dimension. We're transported to the Twilight Zone, the Outer Limits, to a dark pocket of reality where our worst nightmares come true. As players we surrender to the whims of the developers and are taken on a thrill ride where we can experience terror without the real-life ramifications. With their gritty style, claustrophobic environments, and dire feel, Resident Evil games have always done this--well the early ones anyway--and the RE2make brings back those old-school sentiments in droves.

Built on the new proprietary REngine that powered Resident Evil 7, the RE2make looks beautiful in its hallowed glory. High-quality atmospheric and lighting effects bring a new sense of realism and add another layer to that choking fear of impending doom, and the sound direction is absolutely amazing. This brings me to another point: if you play the Resident Evil 2 Remake 1-Shot Demo, make sure you do so with headphones on and in the dead of night. Turn out all the lights, put your headphones on, and be whisked away to a creepy, haunting slice of gameplay. 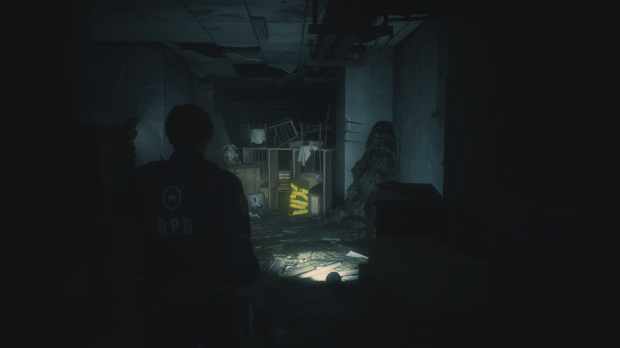 What you see isn't as scary as what you don't see, though. I was more creeped out from what I heard over the things I saw; the environments were more set pieces that grounded me to this bizarre world gone awry, this place where blood painted the walls and horrors shambled about. It was the binaural sound effects that got me the most. The effects made me imagine all sorts of things and really sparked that thrilling fear that pervades most of the demo.

Zombies made all sorts of strange noises that seemed to come from everywhere. They even half-whispered things as if part of them were still human, offset by guttural growls and animalistic moans.

It sounded like danger lurked around every corner, making me paranoid, making me pay closer attention to those corners and walls and hold back the panic that threatened to make Leon's aim sloppy. And when things did go wrong I found myself losing my cool and scrambling to survive, as if I was actually there.

All of these things are hallmarks of an excellent horror game. 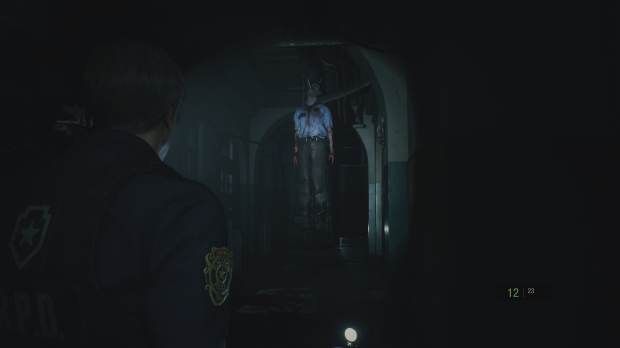 The environments also added to that deep sense of unease. Everything was dark, or half-illuminated by cold flourescent lighting. Signs of struggles or outright murder were all around, and bodies even hung in weird juxtapositions in the ruined police department. The building, which had once helped keep Raccoon City safe, was now a blasphemous fane to some unholy god of the undead.

Revenants shambled the tight corridors, breaking through the glass windows to feast on my flesh. The very shadows felt alive somehow and even as my flashlight pierced them, the darkness seemed to grow even thicker around me. The whole place looked and felt like a living haunted house that had teeth and was very, very hungry. 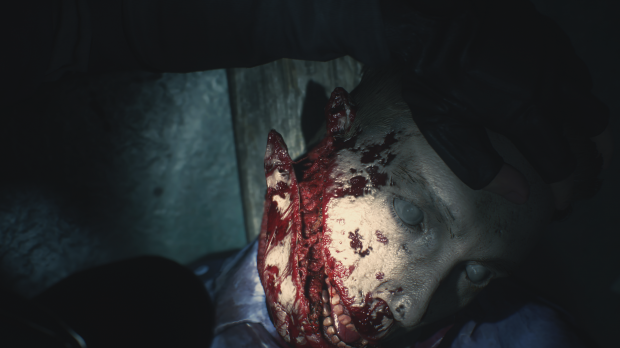 The gunplay and movement was pretty clunky and channeled the awkward feel from the original. But this actually helped the horror factor quite a bit. You move like you're in a dream and things feel weighty, bringing a stronger sense of unease as you don't entirely feel in total control. You have to adapt to all things or die: the world, the combat, the weird themes, and the claustrophobic rooms and corridors.

There's a few puzzles thrown in here including the statue puzzle and keys, and I felt that old familiar confusion creep back in. The puzzles actually add even more weight to the unease factor because you're unsure of what to do, so you have to roam around and re-investigate those creepy areas all over again. Maybe you missed some secret passageway, or some switch, or some token...and you have to go back into that dark hallway where god-knows-what is waiting for you. 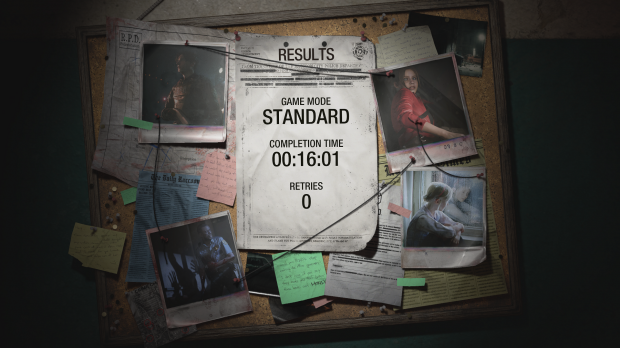 All in all I found the demo to be extremely satisfying. I was able to beat them demo in about 16 minutes without dying and found myself returning again for another playthrough. This was a short but deliciously sweet sampling of an incredibly high-caliber re-imagining of an old-school classic and I feel it'll be a must have for all horror fans.