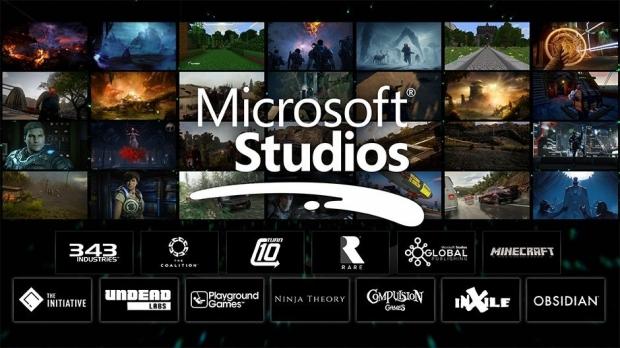 In a bid to fill out its flagging first-party slate, Microsoft recently bought a slew of renowned games-makers like Ninja Theory, Undead Labs Compulsion Games, Playground Games, Obsidian Entertainment, and inXile. These purchases were tactical and have a two-fold goal, though: to release new games on Xbox LIVE and in stores as well as significantly bolster its popular $10 a month Xbox Game Pass subscription service.

It's important to note that the mix of acquired studios are considered AA and AAA (Ninja Theory and Obsidian are AA, whereas Playground Games are AAA) and will games for Microsoft accordingly. This poses an interesting spectrum of content that'll soon be doled out on Game Pass: first we'll have indies, then AA experiences like Hellblade: Senua's Sacrifice, and then bigger projects like Playground's new RPG (probably a new Fable).

In a recent shareholder's meeting, Microsoft CEO Satya Nadella framed these acquisitions in an interesting way:

"And in gaming we are pursuing an expansive opportunity from the way the games are created and distributed to how they're played and viewed. And we're investing aggressively in the content and community and cloud services across every endpoint to expand the usage and deepen the engagement with gamers, including 57 million monthly active Xbox Live users," he said.

Remember that Microsoft sees Xbox as an extension of its lucrative services. The Xbox Store and all of its included first-party games are folded into this structure organically, whether it be with microtransactions, engagement strategies, or being included with Game Pass.

As for monetization, microtransactions may only be in Microsoft's AAA games. AA games from inXile, Obsidian, and Ninja Theory might be exempt and instead roll out onto Game Pass to make up for missed potential mTX earnings.

We already know Microsoft confirmed its first-party games would come to Xbox Game Pass, but Nadella's words give insight as to why the acquisitions were made, and, by extension, why new buyouts could occur. This paints an interesting forked and forward-thinking roadmap at Microsoft, and I'm curious to see how this unfolds in the months and years to come.