Not enough can be said about Half-Life and its lasting legacy on the games industry. When I first played it in 1998, Half-Life was unlike anything I'd ever experienced before. It had action, it had this macabre and weird horror aspect to it, it even had humor (the scientists still crack me up today). But most importantly, it was different and unique, it was experimental and created an interesting universe that we've all been re-visiting for two decades.

Today Half-Life celebrates its 20th birthday, and two of my closest friends and I still play it even now. With high-fidelity FPS games like Call of Duty, Halo and Battlefield, we still choose to jump into those old endearing graphics to blast up some enemies with a popular Half-Life mod. Sven Co-op has breathed new life into an old game and allowed a kind of multiplayer experience I had always dreamed of back in the day, and everyone should log in for a match or two with some buds to celebrate this monumentous occasion.

Valve might be making a new Half-Life game for its new VR headset, but for now we should all take a run through Black Mesa and relive those old memories.

For a more personal look at the game's history, I asked my friend Joe to recount his experiences with Half-Life and how it changed his gaming experiences. Joe is a die-hard Half-Life fan through and through and spent many, many years tweaking maps, blasting friends in deathmatch, and smashing headcrabs with crowbars.

"In my family, Duke3D was king. That was our goto deathmach game for years. We tried to transition to Quake II, but it was too blocky and awkward. We retreated back to the familiar flat sprites of Duke that oddly seemed more realistic. For my family, multiplayer quality was far more important than single player. Mostly because in the FPS world, single player was essentially monsters in mazes. We just didn't expect much from it.

Then came Half-life. Nothing would ever be the same. Gone were the days of getting dropped into the action mid-storyline (If there was a storyline) and digging out the instruction manual hoping to get some idea of a backstory.

For the first time ever, we were part of the storyline from the beginning, and the story itself involved more than just clearing corridors of bad-guys. Oh and as far as multiplayer goes, the king was dethroned.

I brought the "Half-Life Day One" demo CD to my friend and said, "Dude, you have to try this." 20 years later, we're still developing new maps and hosting servers. A lot of other great games have come and gone over those years, but nothing that as ever come close to having that same impact us. 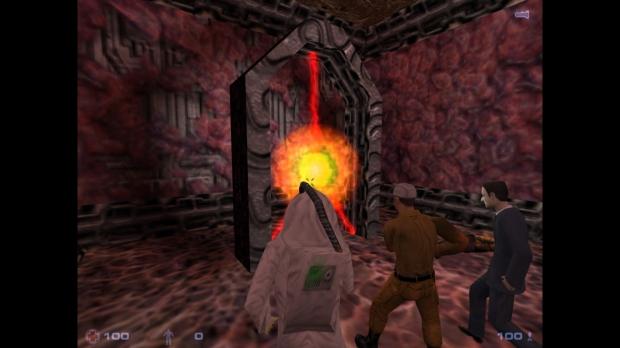