For the first time ever Ubisoft is including dialog mechanics that can actually change the course of your Assassin's Creed story.

Assassin's Creed: Odyssey already looks absolutely amazing thanks to its ancient Greece timeframe and Origins-based combat, but Ubisoft is keen on morphing the series into a RPG. Unlike previous games, Odyssey will give players tons of freedoms and choice both in how they tackle quests and explore, but also how they interact with NPCs. These dialog interactions will shape and mold your personal odyssey throughout the myth-infused Aegean, and your choices will ultimately unlock new pathways or block them off.

In a recent interview with VG247, Odyssey senior producer Marc-Alexis Cote says dialog options can determine what quests are available to you. And it's not always straightforward or black and white--you won't immediately know how your choices affect questlines or characters. This reminds me of a radiant quest system found in a lot of today's popular RPGs and will add more depth to specific decisions.

"Depending on what you answer, it may lead to an entire quest line down the road. We've taken the approach where we don't tell you you're about to make an important choice. We tell you at the beginning to be careful about the choices you make because they may have an impact. We don't promise anything. We try to keep this very blurry so players are always looking for the consequences of the actions they've taken," the producer said. 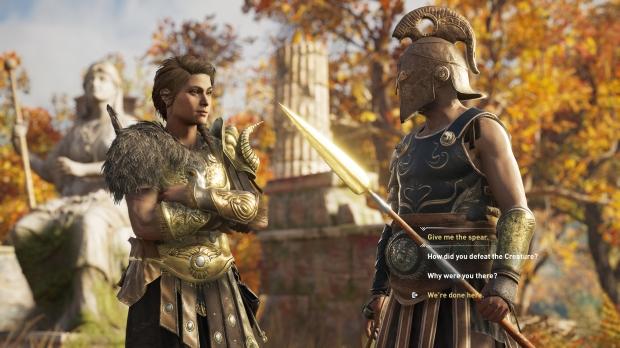 Armed with this new dialog system and an emphasis on randomized RNG-based gear, Ubisoft now considers Assassin's Creed a fully-fledged RPG. We should see these mechanics carry forward in future games.

Here are a few other tidbits we know about Odyssey:

Check below for more details about the game:

For the last three years, the team at Ubisoft Quebec has been creating an exciting new chapter for the Assassin's Creed franchise. In Assassin's Creed Odyssey, the action takes place in Ancient Greece, a world rich with myths and legend, in fifth century BC during the Peloponnesian War between Sparta and Athens.