Konami's first quarter earnings show the Japanese games-maker is doing quite well for itself, despite being near-universally disliked among gamers. 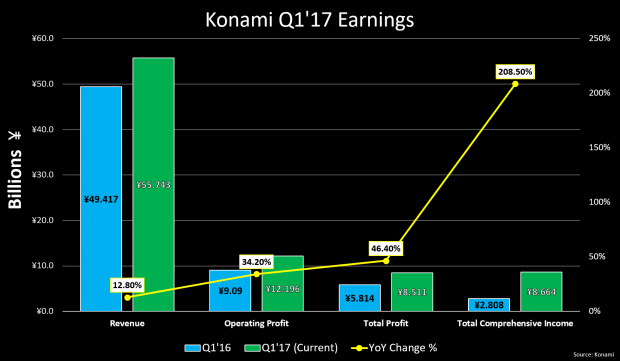 Controversial games publisher and developer Konami kicks off its fiscal year with strong overall growth in revenues driven by successful performance of its videogame branch. The company earned total revenues of 55.743 billion yen ($503.303 million) in the quarter ended in June, up 12.8% year-over-year. Total operating profit reported for the quarter was operating profit 12.2 billion yen ($110.129 million), up a strong 34.2% from fiscal Q1'17. Konami's total profits for the three-month period are also up 46.4%, with 8.5 billion yen ($76.729 million) being generated. 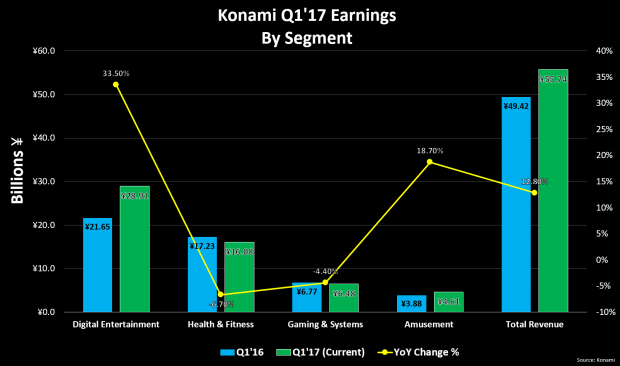 Out of Konami's four segments, its Digital Entertainments videogame segment was the biggest contributor to fiscal Q1'18 revenues. Catalyzed by sales of the popular Yu-Gi-Oh! card game series, a PES 2017 soccer mobile game, and Super Bomberman R on Nintendo Switch, Digital Entertainments pulled in 51.87% of total quarterly revenues, or 28.914 billion yen ($261.06 million), up a strong 35.53% year-over-year.

The company's future release slate looks bleak, at least compared to what gamers would want from Konami. Six out of its nine total games are Japan-only, and only five of them will be released on traditional platforms like PS4/PS3, Xbox One/Xbox 360, PlayStation Vita, Nintendo 3DS or PC--the rest are "arcade games", or pachinko cabinets.

You can see a segment-by-segment earnings breakdown below detailing Konami's full fiscal Q1'18 earnings, as well as the upcoming release slate pipeline and full FY2018 forecast. 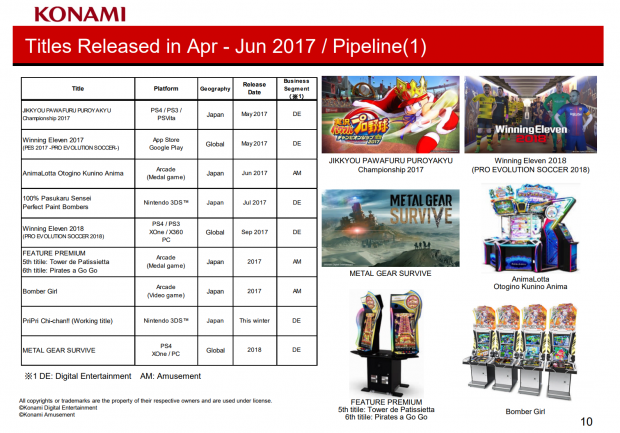