HBM3 is being worked on by SK Hynix and Samsung and will offer up to 64GB VRAM at higher speeds than HBM2, but a low-cost version of HBM is also in the works, which will feature less bandwidth but a lower cost point than HBM1 and HBM2. 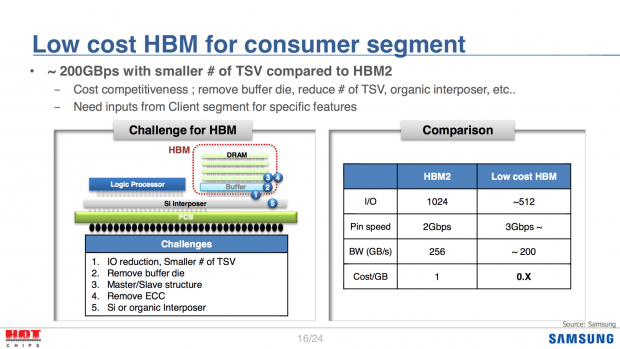 The new low-cost HBM will feature increased pin speeds, from the 2Gbps on HBM2 to around 3Gbps on the new low-cost HBM while the memory bandwidth shifts from 256GB/sec per DRAM stack, to around 200GB/sec per stack. This means the upcoming low-cost HBM could reach the mass market, so we could be looking at HBM-powered notebooks and consumer graphics cards, more so than just the three from AMD that we have now in the Radeon R9 Fury X, Radeon R9 Fury and R9 Nano graphics cards.