What Final Fantasy game would be complete without an airship? Final Fantasy 15 is taking a more unconventional approach with its in-game airship--in fact, it's not really an airship, but a car that converts into a streamlined jetliner to soar the heavens. We got our first look at the Regalia's flying mode a few months ago, but Square Enix has blown the lid off of the svelte transforming speedster in a new clip.

The Regalia is the ancestral royal "ship" of the Lucian kings, and belonged to Noctis' father Cor Leonis--and his father before him. The car-airship is more than just a vehicle--it ties Noctis to his heritage, his bloodline, and serves as the main locomotion for the game's party members--Noctis, Prompto, Ignis and Gladiolus. The Regalia's flying mode only unlocks "pretty far into the game," and can be customized--the clip we saw is the Type F version. The ship will also transform depending on the altitude, and yes, you can control the ship freely just like in other games.

Final Fantasy 15 game director Hajime Tabata says that the Regalia is the only flying ship in the skies, and you won't have to worry about having your scenic views interrupted by enemies--there will be no combat sequences in the skies.

"The Regalia's flying model is made possible through customizing once you get pretty far into the game, so there's some playthrough elements there. While there are some places that can only be reached while using it, you won't need to customize it as part of the story. There are two aims for the flying model. One is "I want to fly using the car that I've been journeying with" and "incorporating the thrilling sense of landing an aircraft." It's easy to lift off, but you might find yourself in trouble if you don't land properly. There won't be any other flying vehicles other than Regalia. I think it's much better to have the Regalia that you've been traveling with go flying rather than to simply throw in an airship just because it's Final Fantasy." 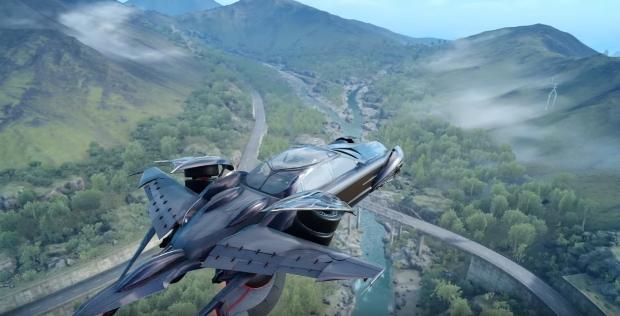