The next installment of the yearly Call of Duty franchise, which is reportedly named Infinite Warfare, just might have a more expensive Legacy Edition which very well could include a fully remastered version of one of the best Call of Duty games that's been created; the original Modern Warfare. 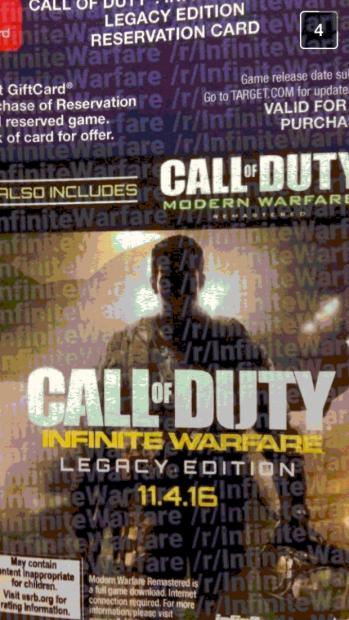 A user on Reddit has posted what is supposedly the reservation card, which can be picked up in the isle for pre-orders at retailers, for Target. It shows what might be the box cover art and also displays, very prominently, a release date of November 4th 2016. The artwork itself is certainly within the same style as all previous Call of Duty installments and the card itself looks quite legitimate, but we've still not had any official announcement by Activision or through Infinity Ward themselves.

Despite that we're definitely within the normal time frame that we see an announcement of some kind for the series, and a listing has appeared on the PlayStation store, so we might be seeing some news very soon. The only word we've received is from Activision and that it'll be "innovative" if nothing else. What innovation the Call of Duty: Ghosts developer is bringing to the table, we just don't know.