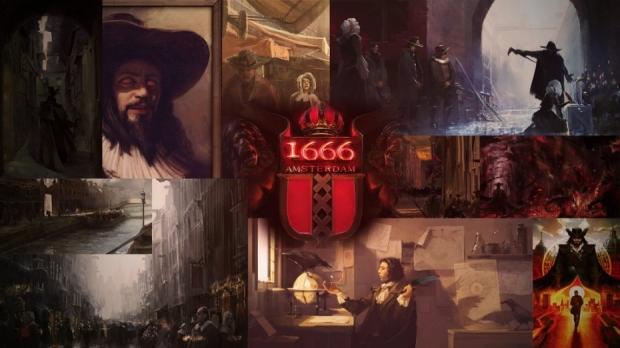 The beef between Patrice Desilets and Ubisoft surrounding the once-cancelled Amsterdam: 1666 game has officially been squashed, and Desilets now owns creative and business control over the IP. Amsterdam: 1666 was to be Desilets' next AAA game at THQ Montreal, but the company eventually fell apart, and Ubisoft scooped up the project and the dev team. Shortly after acquiring the game, however, Ubisoft cancelled the project and fired Desilets. This kicked off a fierce legal battle between the Assassin's Creed creative director and Ubisoft, but the publisher has finally relinquished its control to deliver 1666: Amsterdam back in Desilets' hands.

Although we know next to nothing about the game, Desilets showed off a bit of artwork that speaks volumes. The teaser is quite eye-catching, and portrays a dark, macabre alternate-history universe that conjures up Middle Age vampires, demons, and other harrowing ghastly creatures. Considering Desilets was directly responsible for making Assassin's Creed into a AAA juggernaut, we could see 1666: Amsterdam become a smashing success. I for one can't stop looking at the imagery...it's quite hypnotic and mesmerizing.

"Putting aside our past differences, Patrice and I are above all interested in the creation of videogames and the evolution of this medium of entertainment," said Ubisoft Montreal CEO Yannis Mallat. "This agreement is good news for everyone. Ubisoft's creative teams are currently working on innovative projects that will mark our industry for years to come. This is precisely where we want to focus our energy, on our teams, to continue what we have been building in Quebec for nearly 20 years. As we have always said, Patrice is a talented designer and we wish him all the best in the development of his future endeavours."