AMD laid out its GPU architecture roadmap through to 2019 at its huge Capsaicin event during the Game Developers Conference, but now we're hearing rumbles on its exciting new Vega GPU - due out in 2017.

Vega will reportedly rock a huge 4096 stream processors based on the Greenland GPU, with improvements in the way of the GCN 4.0 architecture, which are included in the IP v9.0 generation of graphics chips under development from AMD.

We should expect Vega 10 to be AMD's flagship product from the Greenland GPU era - rocking somewhere between 15-18 billion transistors, and the exciting new HBM2 technology which offers up to 1TB/sec of memory bandwidth. Vega looks like it'll be fighting against NVIDIA's compute-powerful GP100 (the Pascal-based successor to the GTX Titan X and GTX 980 Ti) - as Vega is the only HBM2-powered card on AMD's roadmap for 2017.

This brings us to the question of "what will Polaris be, if Vega features HBM2" - and the answer is Polaris is closer to the Fiji architecture, with massive power savings thanks to the 14nm FinFET process. Vega on the other hand, is AMD's huge answer to a successor to Fiji - and something that will fight off the GP100 beast from NVIDIA.

We will be at NVIDIA's GPU Technology Conference next week, so expect us to deliver some great GPU content in just over a week's time! 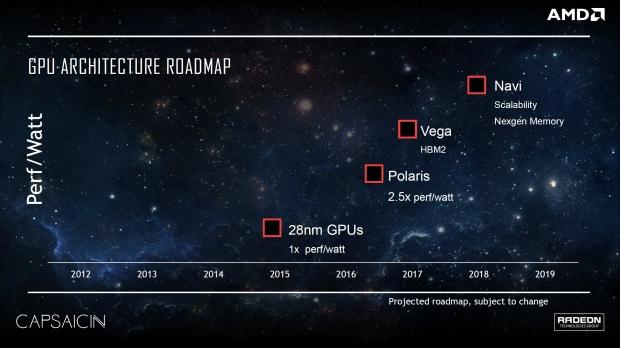