The Xbox app on PC is getting a nice little update today with the Xbox One February update following on sometime tomorrow. The update focuses on the social aspect of gaming, connecting PC and Xbox gamers through Xbox Live. 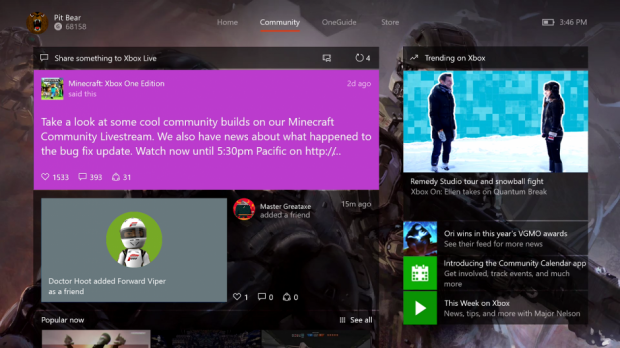 The app update on PC, and on the console, adds the new Avatar Store to help you personalize your virtual self, a more organized Xbox News feed for getting the latest gaming related news and a better "suggested friends" algorithm to help you expand that social circle. In addition, there's a new Xbox Accessories App that lets you configure your Elite controller more easily, even going so far as to letting you change the sensitivity curve of the thumbsticks.

On the Xbox One side, the coming update allows you to see who's in a particular party before you join in on the chat. It also adds a new Gamerscore leader-board, adding another competitive element that was missing. We earned those points, but there was no point if we can't compare to others, friends or otherwise. Sometimes it's nice to know if there's someone you hate in the group, so you can prepare those "mom" jokes in advance.

And of course there's a whole lot more social inside. There's even an easy way to join your friends Twitch broadcasts if that's your forte. Check out the full list of what's coming in the Xbox Wire post. There's a lot to take in.