Sony just announced the special 500GB PlayStation 4 bundle for Uncharted 4 that'll be available this April. The limited edition console will have the visage of Nathan Drake silk-screened onto the console with a golden logo on the bottom to commemorate the release of possible the final chapter in his adventure. 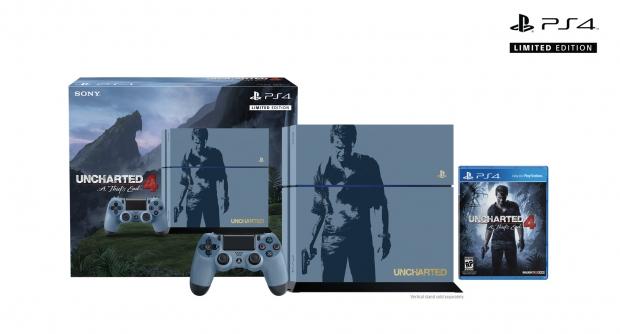 The limited edition bundle will also include a matching DualShock 4 controller and an actual physical Blu-ray copy of Uncharted 4: A Thief's End. The phrase "SIC PARVIS MAGNA", which means "greatness from small beginnings," in Latin. will also be silkscreened on the other side.

As an added bonus, those that buy this bundle will get a voucher for a special outfit, a golden weapon skin and Uncharted Points, the in-game currency, for use in the multiplayer mode. The entire limited edition bundle will cost a cool $399.99, and you can pre-order it later today.

And in case you just want the cool blue motif but didn't order in time, Sony is going to offer the DualShock 4 controller and Gold Wireless Headset as separate items starting in March. The gray blue DS4 will be $64.99 and the headset will be $99.99.