Like Halo 5 and Wolfestein: The New Order, Ubisoft's latest open-world shooter The Division uses dynamic resolution scaling on the Xbox One in order to keep gameplay running smoothly.

According to an in-depth performance analysis from Digital Foundry, The Division's resolution isn't locked on the Xbox One, and instead shifts and scales down to maintain a solid frame rate. During The Division's beta test, many Xbox One users noticed less-defined visuals during heavy action sequences compared to PS4.

To maintain a solid 30 frames-per-second, The Division will downscale resolution on-the-fly during graphics-heavy areas and sequences. The drop isn't readily apparent and is noted to trick the eye, but close observation will reveal blurry signs, motion blur, and lowered sharpness and definition. "Wherever you see heavy volumetric effects and lots of geometry on-screen, there's a strong possibility that The Division's frame buffer is switching to a lower pixel count on Xbox One," Digital Foundry said in their analysis.

If The Division on Xbox One isn't able to hit full 1080p at all times, then what's the scaled resolution? The drop in fidelity is entirely dependent upon the particular scenario, as profound weather effects and combat tend to push harder drops. That being said, we might not see the 900p drops known in some Xbox One games, and most drastic drops still retain 87% of full HD resolution.

For example, DF says that the game's opening shot dropped to 1782x1008 on the Xbox One when looking in a fog-heavy area, but jumped back to full 1920x1080 when looking away.

Remember that these findings were extracted from The Division's beta test, but considering the Xbox One's limited hardware, the final version will likely have dynamic scaled resolution as well. 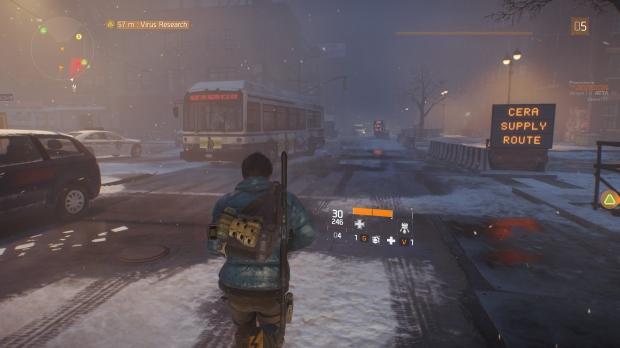