The future holds a lot of technological marvels, but what happens when perfect robots make humans redundant in the workforce? It's actually already happening, says Neil deGrasse Tyson, and as long as we're more "intellectually nimble" going forward, we don't have to worry about it.

"Yes, robots have already taken over our jobs. So what it means is...If all you think about is the jobs today, and you project forward, there might be a day when robots take over every job we have today," Dr. deGrasse Tyson said. "Is that the future that will come? No, because we have innovative people in society, and we invent new things all the time. These require new jobs to manage them, to invent them, to conceive them, to engineer them."

The World Economics Forum already predicts that 5 million existing jobs will be lost to robots by 2020. That's a pretty big economic disruption, and generally seen as a warning sign by most hard-working people. But deGrasse Tyson says that humanity will be okay, as long as we keep stimulating ourselves intellectually.

"So we have to be life-long learners. We have to be more intellectually nimble, as we go forward," the noted astrophysicist said. "Yes, you might have to be re-trained, if your previous job belongs to a robot. But you're smart, learn something new."

The problem is that a good portion of our technology makes the public somewhat more lazy, especially when used in specific ways. The cosmologist has faith in humanity's ability to adapt, however, and his words really help put the SkyNet fears into perspective. What do you think, should we be afraid of the impending robot overtaking, or should we embrace it?

Sci-Fi is full of cautionary "what if" scenarios when it comes to AI and robots, but as long as we continue pursuing knowledge and innovation, brilliant scientists like Neil deGrasse Tyson think that SkyNet won't be a threat to our future. 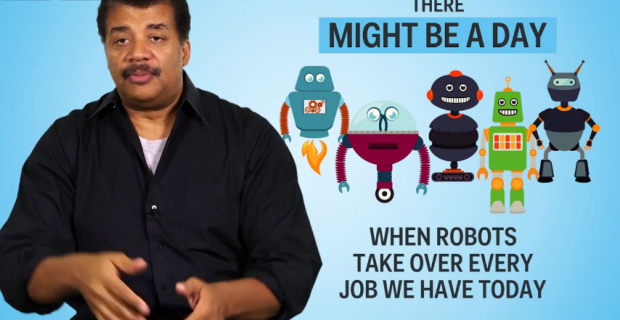