After enjoying a few months as a timed exclusive on the Xbox One, Crystal Dynamics is ready to unleash Rise of the Tomb Raider on the PC. After rumors of it arriving on January 29, it has been spotted on Steam. 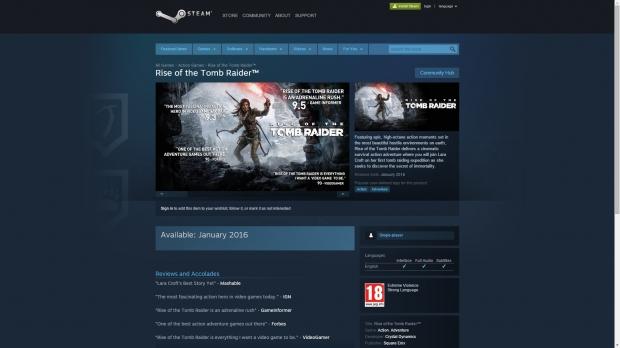 The Steam listing for Rise of the Tomb Raider says that it'll be available in "January 2016", with no specific date just yet. The listing does tease "Featuring epic, high-octane action moments set in the most beautiful hostile environments on earth, Rise of the Tomb Raider delivers a cinematic survival action adventure where you will join Lara Croft on her first tomb raiding expedition as she seeks to discover the secret of immortality".

It was only yesterday that we reported on rumors that NVIDIA would bundle Rise of the Tomb Raider with future GeForce cards, even though AMD has worked closely with Crystal Dynamics on the game, providing its TressFX technology for Lara Croft. We should expect a PS4 version to follow the PC release, sometime in 2016.