In an effort to dramatically improve performance, Skyrim modder UniqueUses created an ultra-low graphics overhaul that transformed the once-detailed continent into a majestic winter wonderland straight out of a Pixar movie. 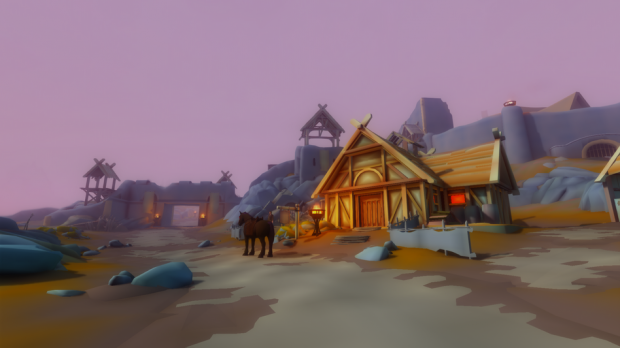 The mod, officially called "Toon Skyrim", was showcased in a Reddit post that has seen some six-thousand upvotes, proving many gamers are eager to try it out. But UniqueUses still has a lot of work cut out for him before Toon Skyrim is ready for release--including fleshing out NPC's, fixing signs, and a number of tweaks across the board.

"I'm basically making my own potato texture mod, with an enb and weather that goes with it to help hide that ugly lod," the modder said in the post, using the term "potato textures" to describe low-def textures. "I like the potato texture style, but I think a lot of fixing up needs to be done for it to be playable. So I'm going to attempt to make things like signs and faces readable but still fit the potato style."

One of the best things about Toon Skyrim is that you don't need higher-end hardware to play it, effectively bridging that performance gap that keeps gamers from a good portion of mods. Toom Skyrim probably won't be ready any time soon, but the modder affirms it'll be available for download on the Skyrim Mod Nexus when it's ready.

It's been four years and counting and modders are still busily plugging out amazing add-ons for Skyrim, and that won't change any time soon...especially since Bethesda won't be announcing a new Elder Scrolls game for a "very long time".