No Man's Sky is undoubtedly one of the most ambitious and anticipated games in recent memory--its magnificent interstellar sci-fi themes awaken the inner space pirate in all of us, not to mention the cosmic beauty of an infinitesimal procedurally-generated universe made of billions of celestial bodies and planets just waiting to be explored.

And what better way to experience such a galactic adventure than with VR? Hello Games' Sean Murray agrees that No Man's Sky would benefit tremendously from VR support, and has shown a lot of interest in the possibility. "Morpheus, Oculus...There's nothing more cool and sci-fi than VR and a big procedural universe," Murray continued in a recent interview with EDGE magazine. "I think that, for the people who want to just explore, and even for the space combat and things like that, it would be a good fit. Let's put it that way."

Acknowledging the sensitive nature of pre-release juggernauts and the deal with Sony, Murray wasn't able to get into specifics: "I don't know what I'm allowed to say. [VR support] is something we're thinking about." 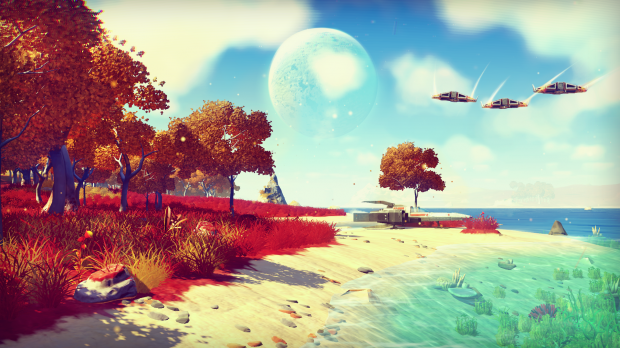 No Man's Sky was previously believed to be a timed-exclusive for Sony's PlayStation 4, however Murray revealed last month that the game would release simultaneously for PC and PS4. This consistent cross-platform release could afford time to work in VR support for the game.

Since consumer models of both the Oculus Rift and Sony's PS4-ready Project Morpheus are planned for a release in 2016, we might see a Holiday 2015 launch for No Man's Sky with VR support shortly thereafter. So far Hello Games hasn't revealed any concrete launch details for the space sim and it remains TBD.