With Intel all set to unveil their new Skylake-S series of processors at Gamescom 2015 in August, we're hearing that the new 'K-series' enthusiast processors will not ship with a stock cooler. 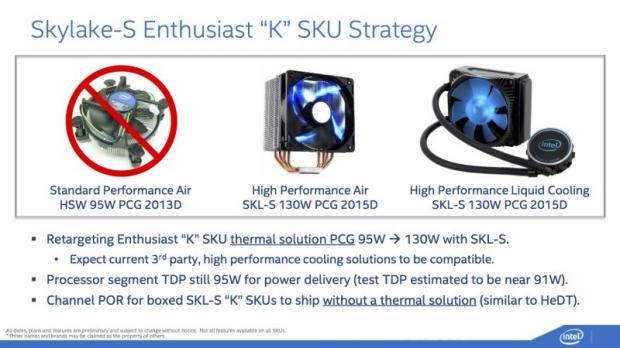 Intel is set to release its Core i7-6700K processor a week after Windows 10 is released, with Intel aiming at enthusiasts buying their own high-performance air, or liquid cooling system for their new CPU. The chipmaker will be offering a new PCG 2015D high performance air and liquid cooling solutions, but the processor itself will ship without a HSF.

The next question is, will Intel drop the price to counter that the processor doesn't include a stock cooler, or will Intel make more profit per K-series CPU it ships, thanks to not giving consumers a cooler.